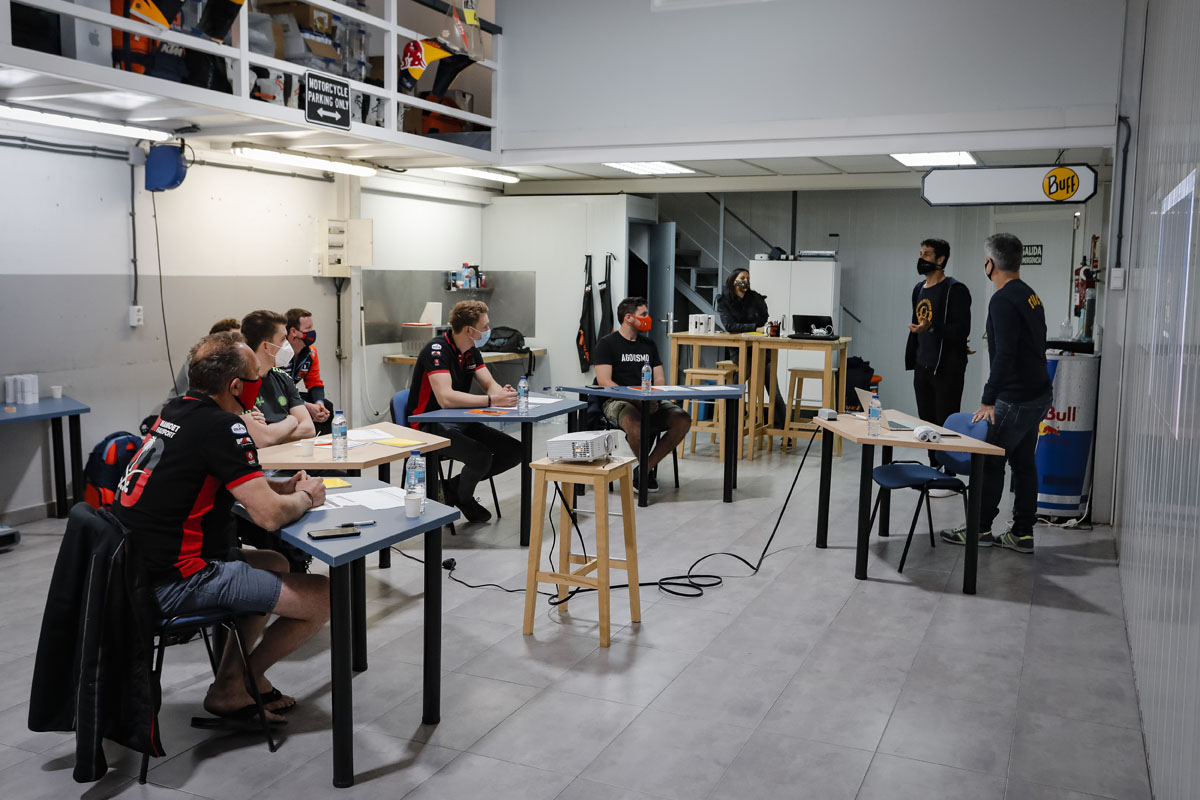 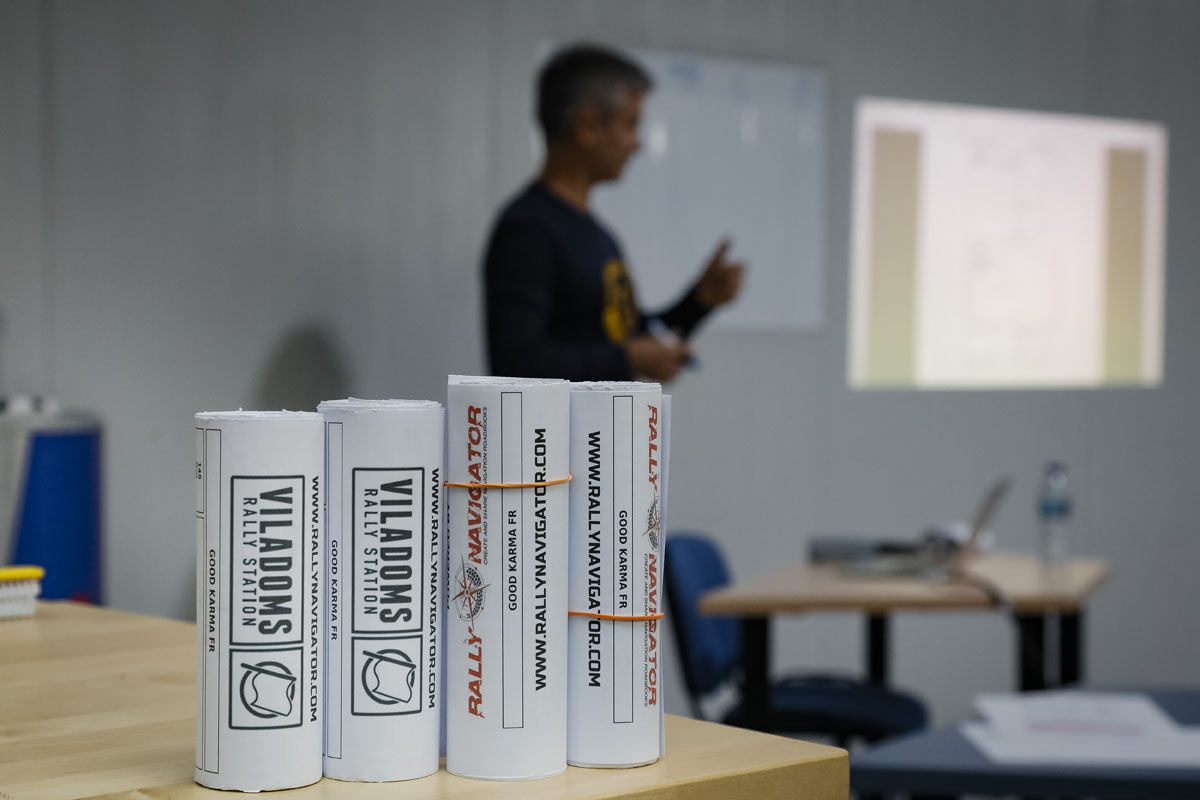 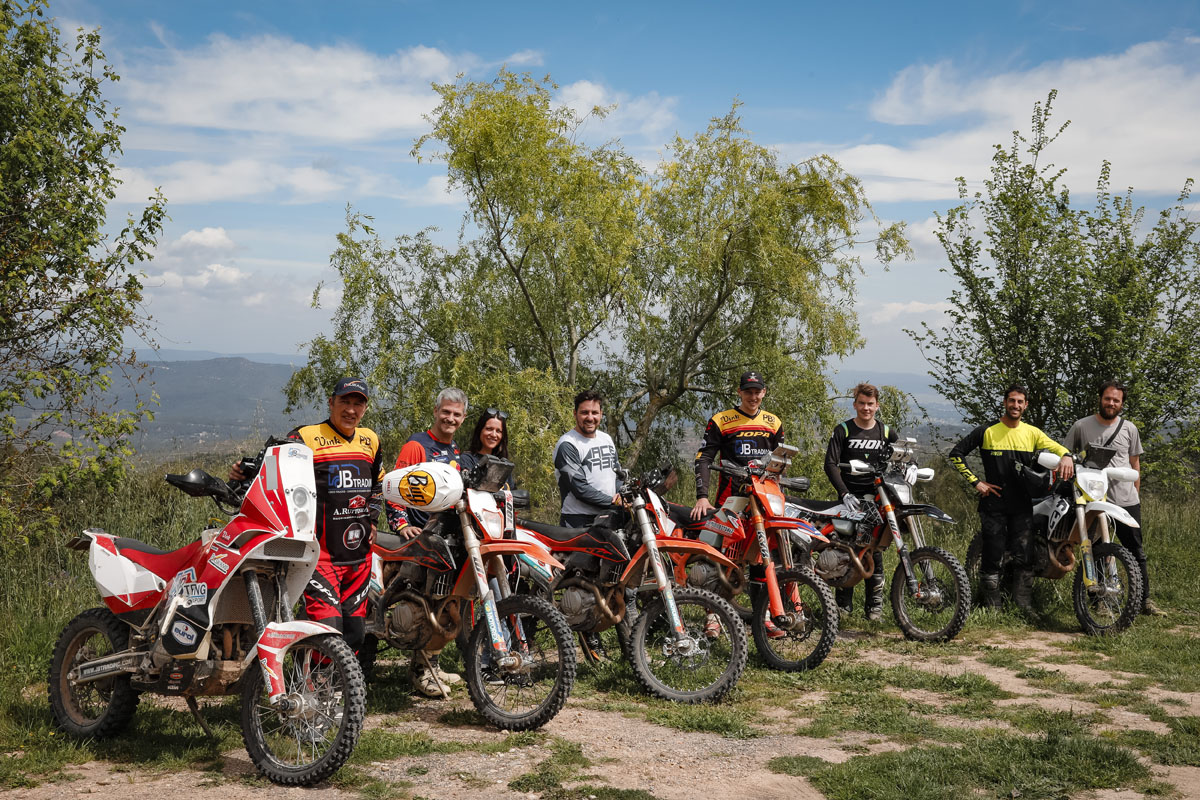 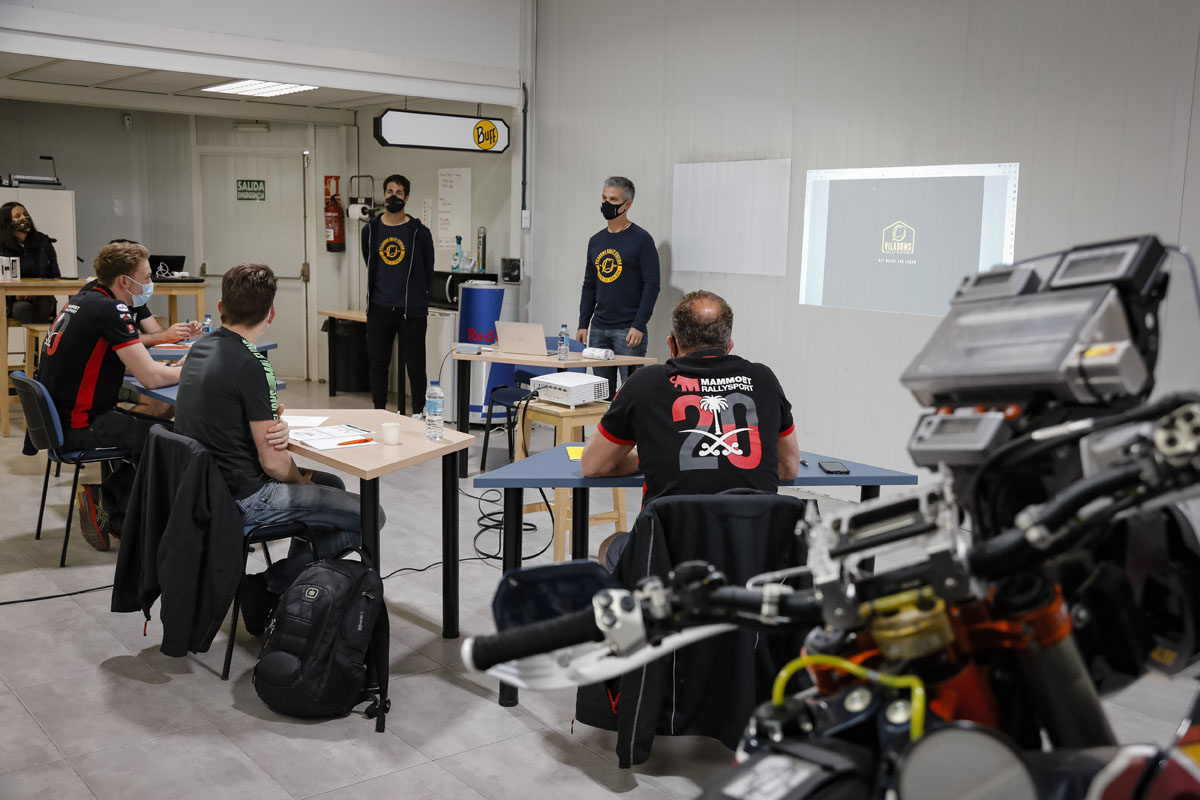 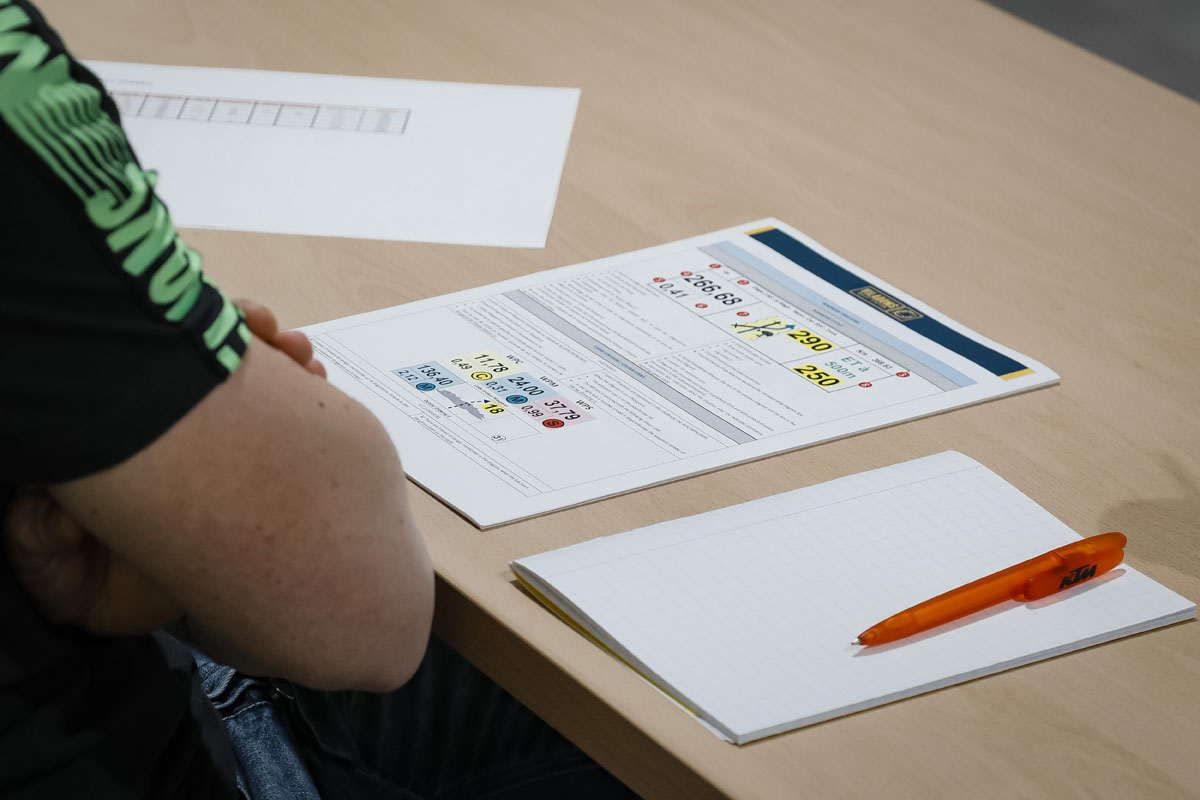 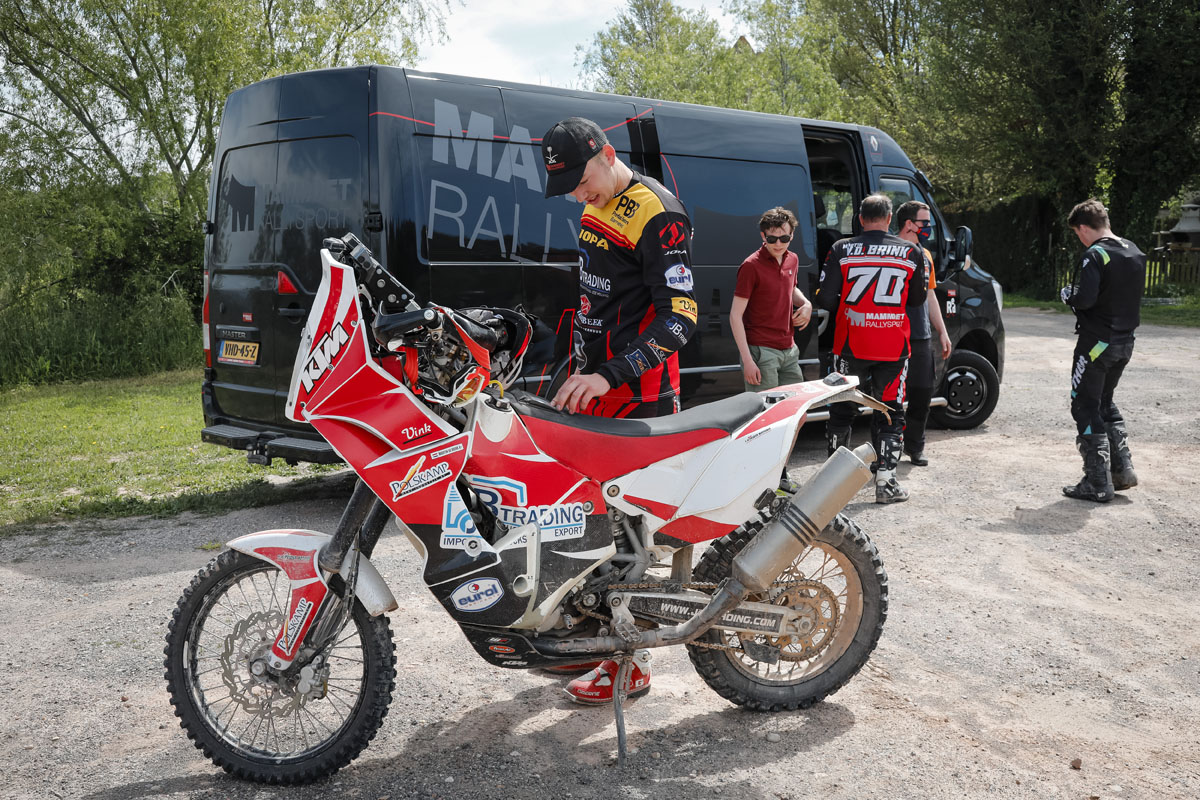 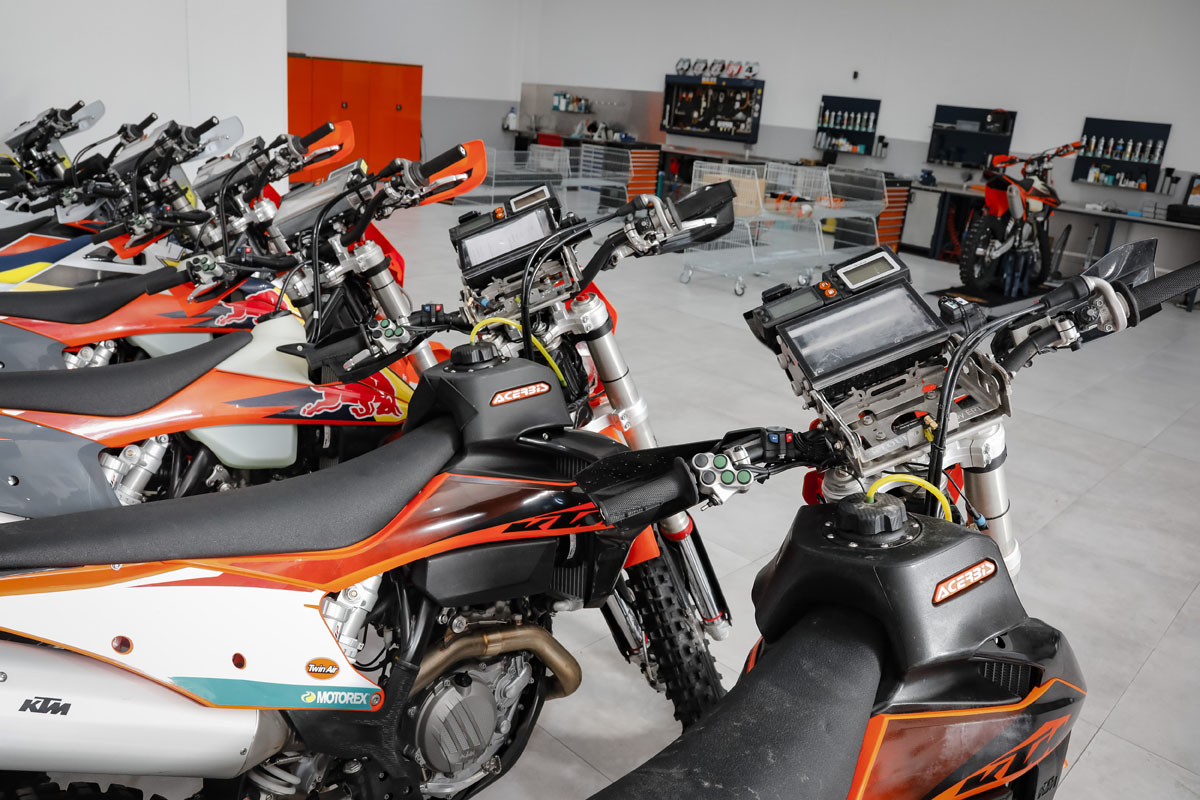 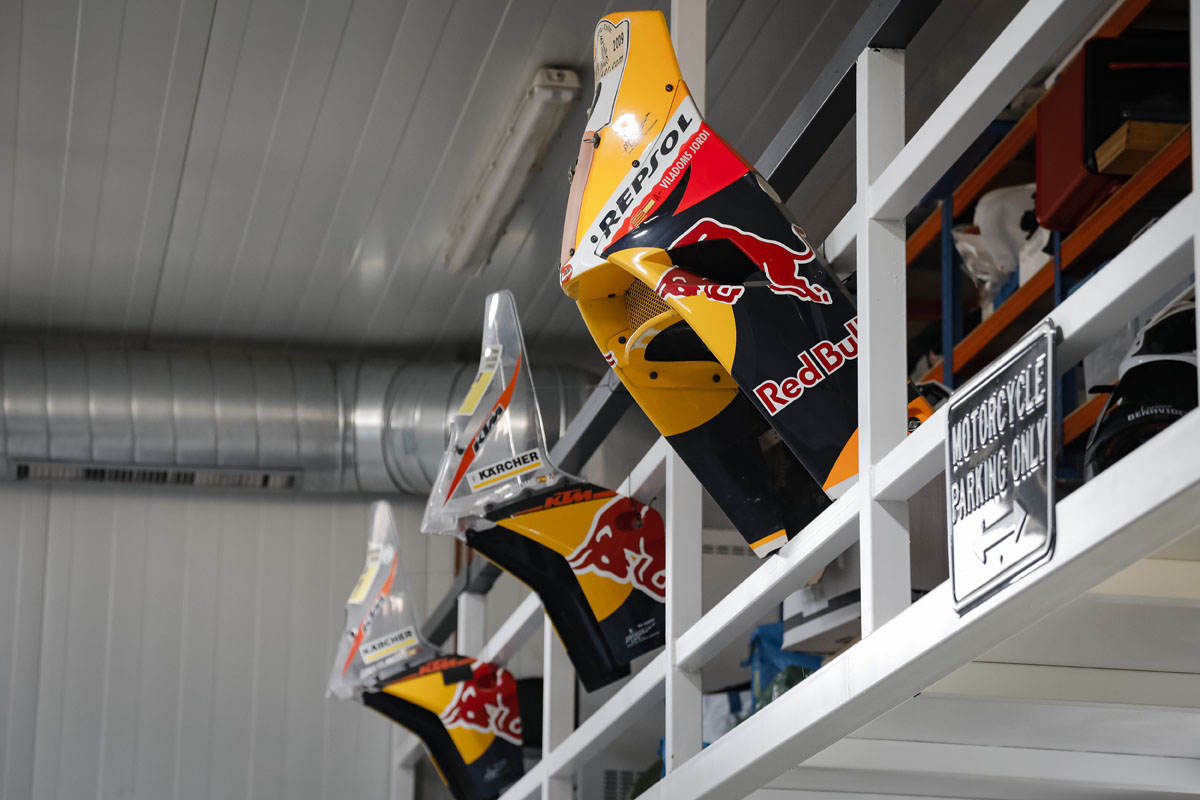 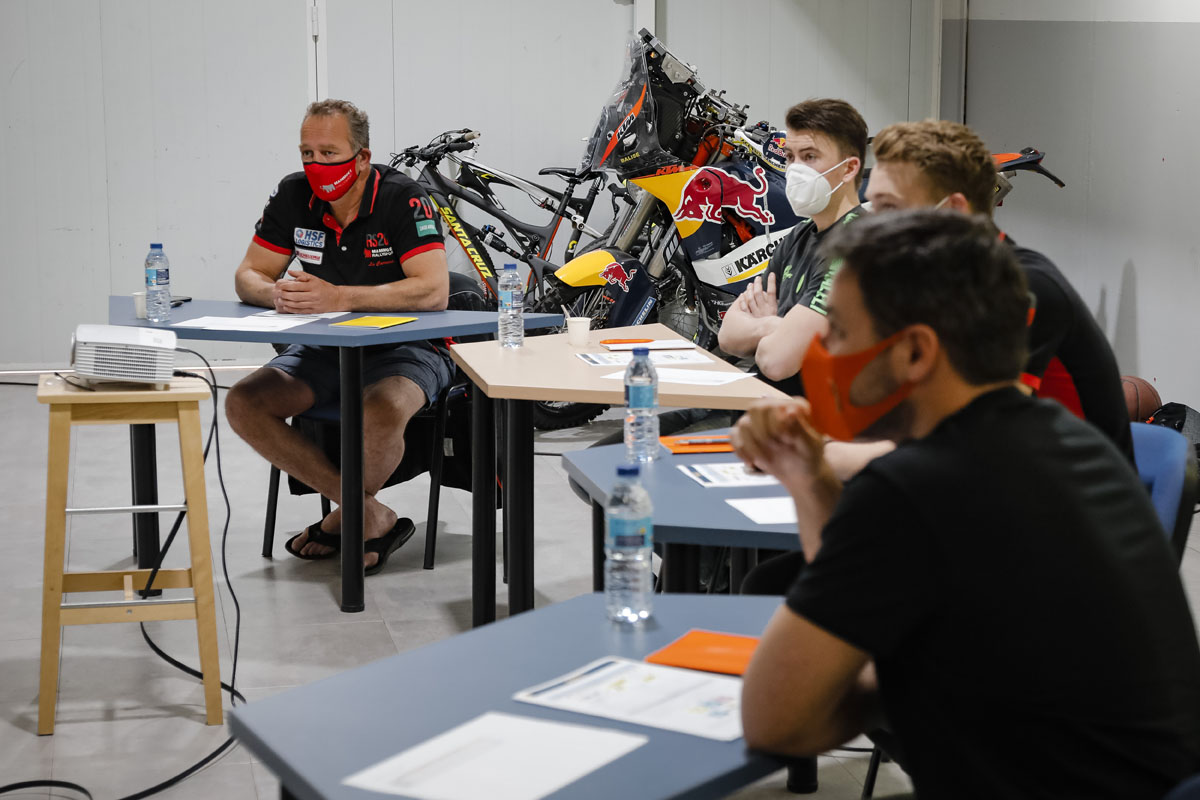 Taking on the sport of Cross-Country Rally is a massive adventure into the unknown but Red Bull KTM team manager Jordi Viladoms has the answer, a specialist rally clinic which is training rookies how to reach the Dakar finish line.

Jordi Viladoms is no stranger to rally, a distinguished career included second place at the Dakar behind his then teammate Marc Coma in 2014. These days he’s moved up the Red Bull KTM Factory Racing ladder to become team manager which brings many duties but not least nurturing rally rookies in the ways of the sport.

In 2020 that included holding Daniel Sanders’ hand as he was thrown onto the big rally bikes and put through the minefields of learning navigation and roadbooks. Sanders is some talent on a bike but Jordi helped the Australian with little or no race preparation to a remarkable fourth place overall as a rookie.

Jordi has also been running ‘Viladoms Rally Station’ clinics for a couple of years from his base in Northern Spain and it is proving a valuable resource for any rider wanting to understand every aspect of the complex sport.

“No one is born knowing how to do confront what you might find in a rally-raid”, says Viladoms about one of off-roads most unpredictable disciplines, “it’s not just give it the beans”, a rookie mistake in the middle of the desert can put you in big trouble.

If you are thinking about competing in a rally or you’re preparing yourself for next year’s Dakar, let Jordi run you through some of the reasons why going back to school could make a huge difference…

Rally-raid schools a ‘must do’

“In my opinion anyone who’s thinking about competing in a rally should do a navigation course”, says Jordi Viladoms. “Do it with anyone, but do it. If you, don’t you will most likely run into trouble. There will always be things that you don’t know, or that you haven’t thought about and some of them might end up being dangerous.” 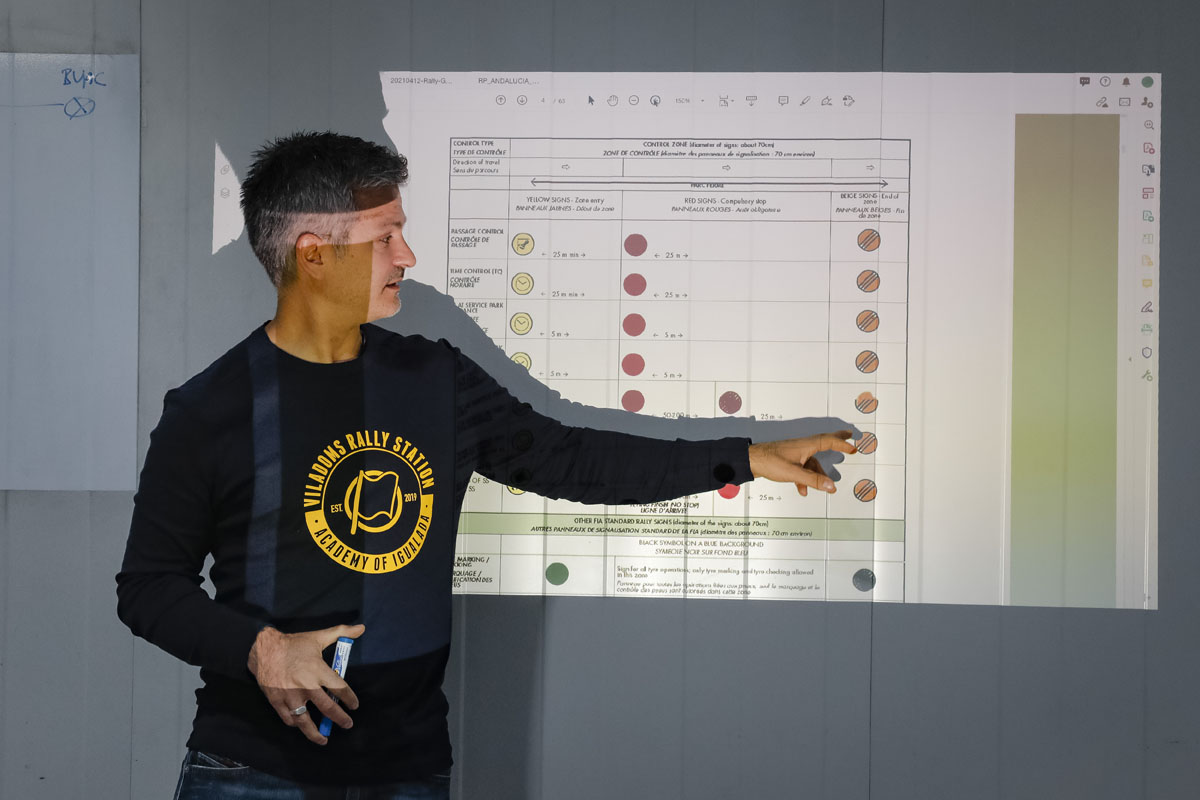 “In the beginning a rally is stressful. That’s why you should take on a course, because you’ll confront all those stressful scenarios and you’ll save yourself some headaches in your first race. You’ll have a much calmer event afterwards.”

Viladoms himself attend one when he was a rookie with one of the best at that time, his namesake Jordi Arcarons. Some years after and with a bunch of kilometres and races under his belt he decided to launch his personal project: the “Viladoms Rally Station”. Which he tries to run when he has some free time from being the Red Bull KTM Rally Factory Racing team manager.

“I always wanted to do it, I have been training the factory riders for some time so I know how to do it with professionals. It’s king of the same training but in a more relaxed way,” adds Viladoms.

“Navigating and reading the roadbooks have always been what I loved most from my job. So, with the support of my wife Tina, plus Armand Monleón as a trainer and Ricky Rojas for photo and video, we create the training school.” Armand isn’t short on experience, he has competed in the Dakar Rally six times and now is Gerrard Farrés’ co-driver. Together with Viladoms they have 22 Dakar Rallies behind them.

“With this training schools we prepare the riders not just for the Dakar Rally but for any rally-raid. At least we do one day which is only theory and then three days of roadbook training to experiment what you would find in a race scenario”, says Viladoms who combines theory with practice to help his pupils to both be able to experiment with navigation and find the pace you need to compete in an event – “it helps to avoid mistakes” he says.

“Normally, when you start racing rally you find out so many things that no one explained to you. You learn by trial and error. You have to get used to the GPS, the rulebook, the roadbook and so many other things that you don’t see in any other discipline, knowing how to ride is not enough”, Viladoms admits, who spends most of his clinics with foreign riders that want to race the Dakar.

That’s why, with so many things to learn, “we go step-by-step” says Jordi who has learnt by experience to divide the theory into four big blocks: cross-country rally, navigations, concepts and security. When Enduro21 spoke to Viladoms he was in the middle of a course with some riders that were going to race the Andalucía Rally and aiming to get their ticket for the 2020 Dakar Rally.

The Dakar Rally, the ultimate goal

Any off-road rider has thought at least once about racing the mighty Dakar Rally. But how would you explain the complexities to someone who has no idea about them? “Do it simple, start by the beginning,” says Jordi whose courses make it clear how rally days unfold and start with the basics: what’s a special stage, what’s a liaison, what are the checkpoints and, even how refuelling works.

Even if they’re simple concepts you have to get them clear from the start so no element comes as a mystery. Jordi normally starts his clinics by explaining these simple aspects but mixes in Pro tips to help riders avoid making rookie mistakes, things as simple as how to approach the flags at the beginning of the special stage, correct timing, where to hand your timecard and so on.

History shows that even the best riders and teams have thrown results away at Dakar by making stupid mistakes or because they haven’t read the rulebook.

Simulating a stage, the best way to learn 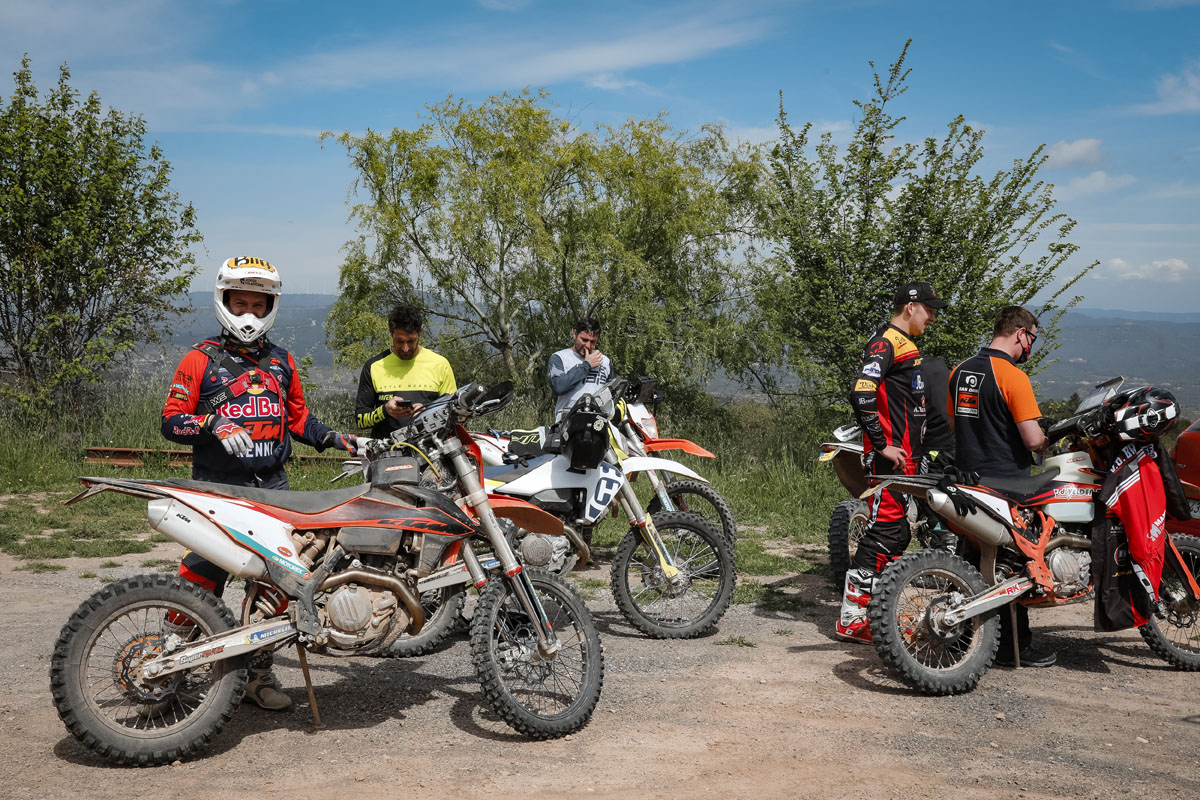 One thing Viladoms’ school does it replicate a real stage. “We explain how a day in a rally unfolds,” says Jordi. “From getting out of the bivouac in the morning until they arrive there again in the afternoon... or night. The importance of the briefing and the timings, things that you need to keep your eyes on… even those things that you should never forget to put in your jacket pocket.”

“Those little tricks like taking a little windstopper with you in the morning, because it gets cold in the early hours of the morning in Saudi Arabia. Or taking something to eat: food, energetic bars, etc… You would learn that in other ways, but it would be because you had a tough time in an already tough race.”

Once all this is clear – even if most of them already know it – we get on to the next stage, starting with the navigation, every rookie’s Achilles heel. It’s the hardest thing to learn, you not only have to master the roadbook but also all the instruments around it – Iritrack, Tripmaster, even the buttons in your handlebar’s to make the roadbook go back or forward – and how they all work together.

“The navigation is the biggest part,” says Jordi. “We teach them how the roadbook looks. How to read it and to understand all its vocabulary, because it evolves and changes continuously. We explain what vocabulary they use in the Dakar and how David Castera builds the roadbooks for the Dakar Rally [the ‘industry standard’ in this sport]. We also introduce them to new concepts such as the waypoints, the neutralizations, the speed zones…” 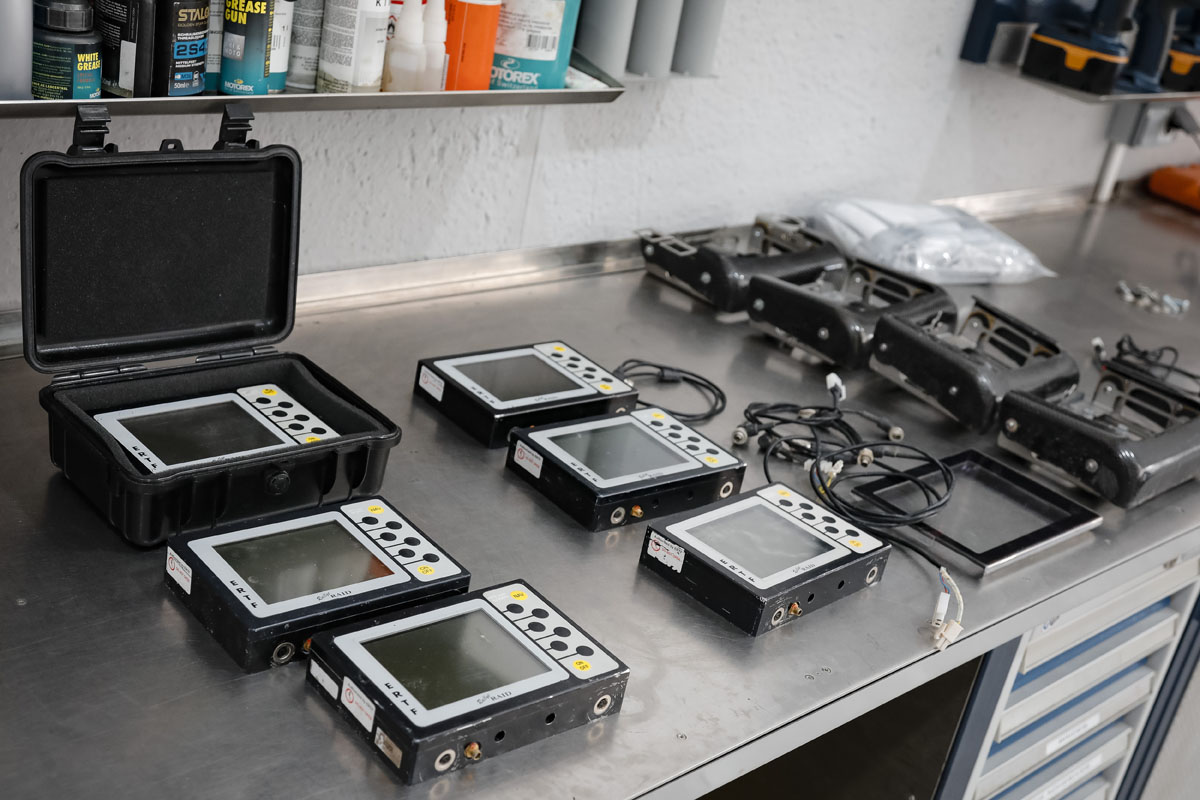 “We also spend a large amount of time getting to know how the RTF [radio telephone] and the GPS systems used in this races work so they can understand everything that happens and how to operate them,” adds Viladoms, who has being doing this clinics for two years despite the Covid pandemics and assures us, “we have been able to tweak the lessons, so you don’t find anything new when you arrive at your first rally.”

Learning all this separate from an event does not seem like a big deal but the key to navigation is to apply it to make the right choice in the right moment while keeping your mind clear and riding at pace…it can get complicated to do it all!

Not everyone can do it well quickly. Have you heard of any rookie who has won the Dakar? There’s only one, Cyril Neveu but he won the first edition of the Paris-Dakar in 1979 so we are not sure if it counts…

Understanding the concepts is not enough, you need to practice

“When the riding time arrives, we get on the bike and stop from time to time to explain things and correct the errors that they can be making, we make them go around a waypoint so they know how the arrow in the GS works and how they get closed and ‘validated,’” Viladoms continues.

As far as safety goes, something which the FIM and the Dakar organisers ASO take very seriously after the loss of Paulo Gonlçalves in 2020, “we explain how the races in the desert are and warn about the risks that they might encounter, the danger types and the mentality needed to race a rally. We also inform them about how the Iritrack works and how it needs to be activated in an emergency.” 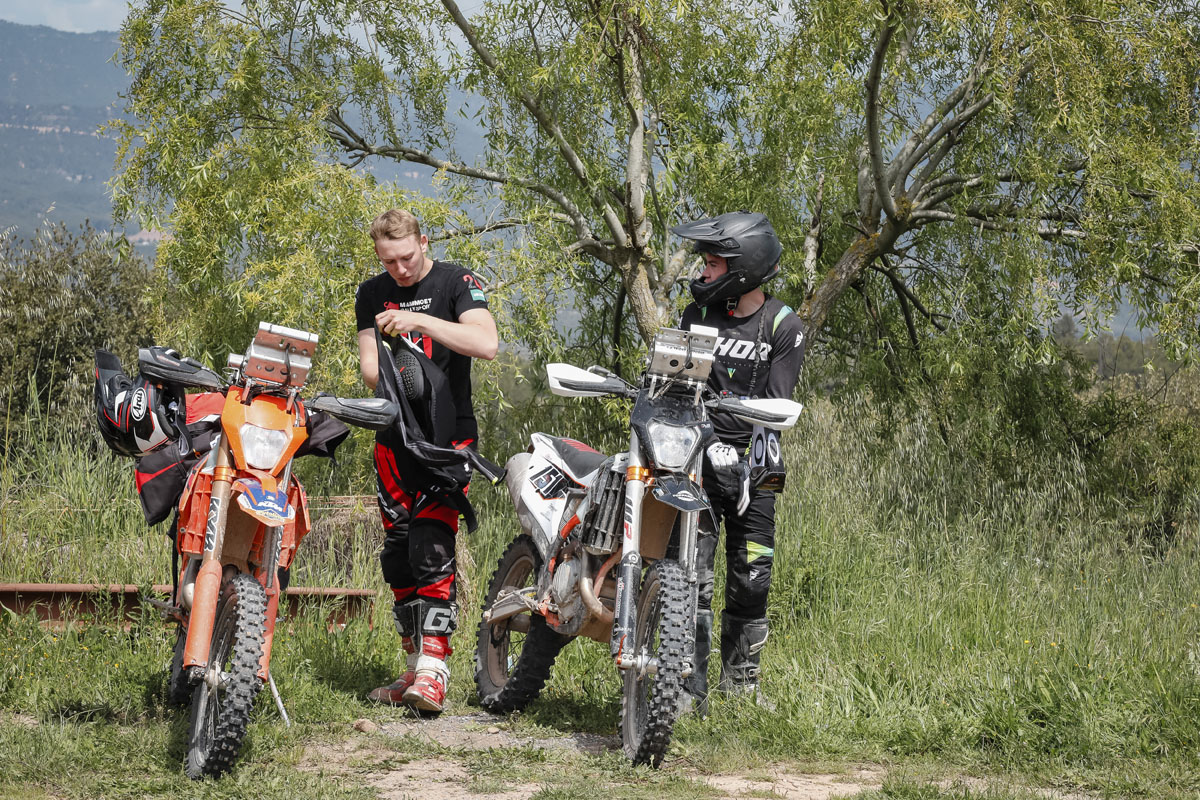 “We observe how they’re riding and sometimes we have to tell them to take it slower. You have to warm them that it’s not all about speed in Rally.” Adds Jordi. “After four days you already see were they struggle and which areas they need to work on.”

“We try to touch every key aspect, even the mechanical side, because when we simulate a Dakar stage, we also give them some tips about what they’ll find and what they should check on their bikes in a marathon stage.”

So, if you’re thinking about giving rally racing a go and you don’t want to look like a fish out of water or stack up a list of ‘if only I’d known’ stories, you might want to consider a navigation school and few will prepare you better than Viladoms’ with all his vast experience.

The Viladoms Rally Station website is still under construction, so if you want to contact them to know more about their training schools and dates drop them a message through Intagram at @viladomsrallystation.