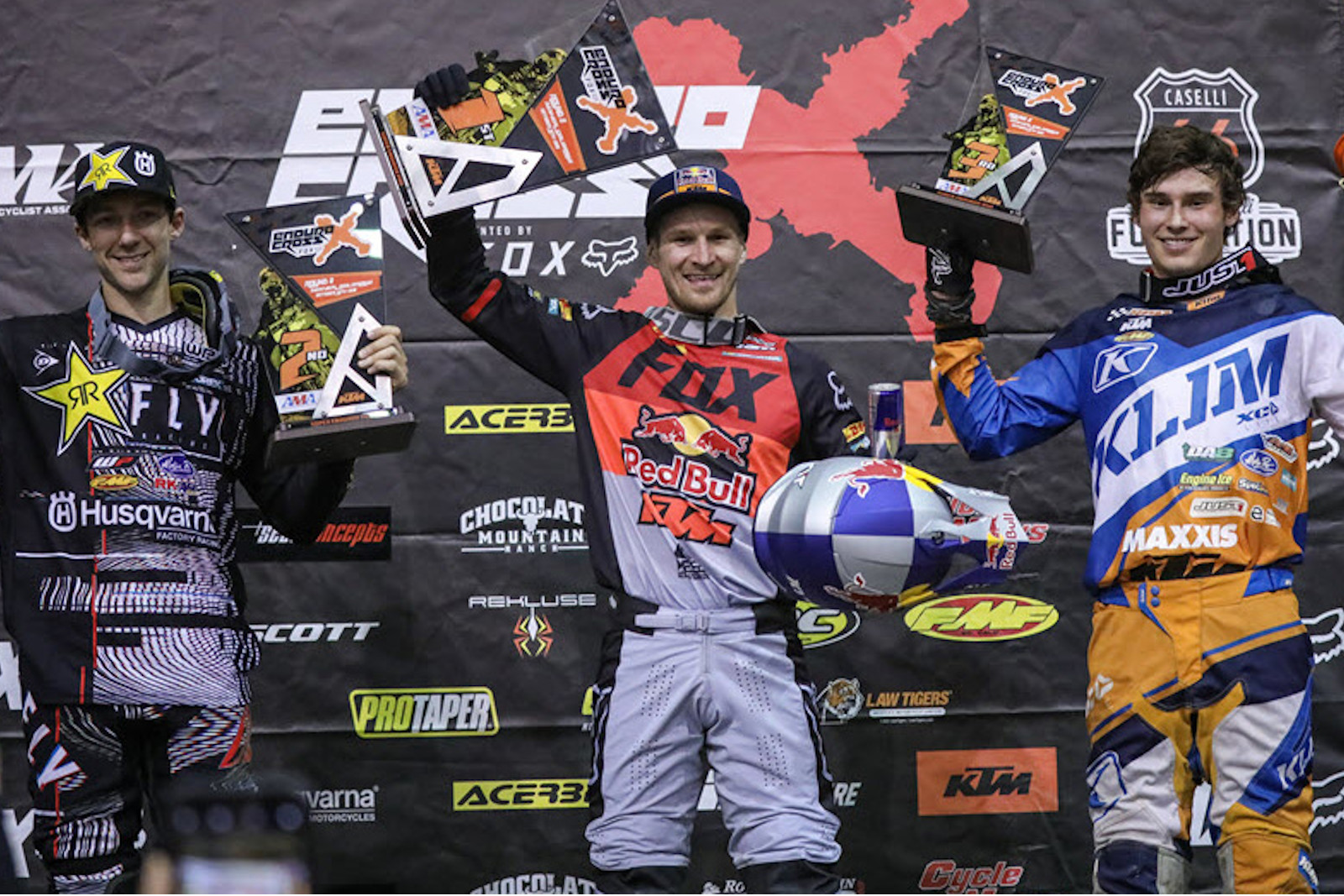 Taddy Blazusiak wins the 2019 Denver EnduroCross after clashing with championship leader, Colton Haaker who finishes second ahead of Trystan Hart.

The new format for Super EnduroCross class in 2019 produced three moto format produced epic racing inside the National Western Complex, Denver with Taddy Blazusiak the rider in form with a strong 1-1-2 scores to take the top step of the podium.

Colton Haaker finished second overall with 2-2-4 results. A pair of close second palces in the first two motos were true to form but a first-lap clash with Blazusiak in moto three resulted in both riders going down and Haaker with his leg being stuck in his bike. He managed to come back for a fourth to edge out RPM KTM’s Trystan Hart, who had 3-5-1 moto results.

The overall result puts Blazusiak within two points of Haaker and sets-up a winner-takes-all final round of 2019 next weekend in Boise. 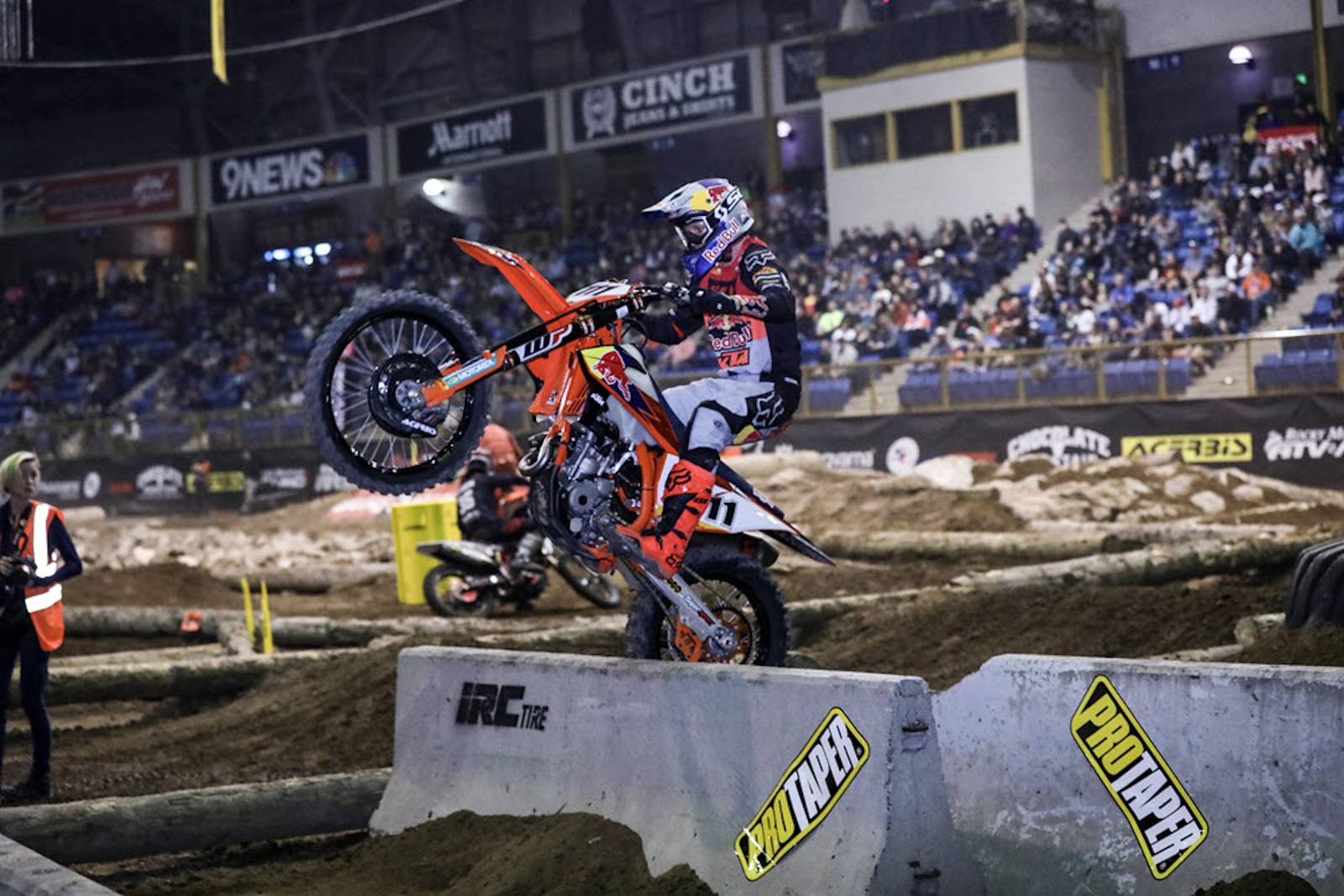 For the second race in a row, Blazusiak got the day started by setting the fastest time during the Seat Concepts Hot Lap with a 48.618 second lap. Hart, TM’s Ty Cullins, Haaker and Beta’s Max Gerston rounded out the top five.

Hart took the Fox Holeshot in moto one with Cullins close behind. Blazusiak passed Cullins on lap two but it took him until lap five of nine to pass Hart for the lead. Haaker completed lap one in fifth and worked his way through the field to pass Hart for second on lap six. He closed in on Blazusiak but was not able to make a pass for the lead. Hart hung on for third. Gerston and Cullins rounded out the top five in moto one.

In moto two, the gate picks were reversed from the moto one results and SRT/Three Bros Husqvarna backed Noah Kepple took the lead and led the first lap. Blazusiak came out second despite the second row start and passed Kepple on lap two. Haaker moved past Kepple on lap three and again closed on Blazusiak but again finished a close second. Kepple held on for third in the moto. Cullins and Hart finished fourth and fifth respectively. 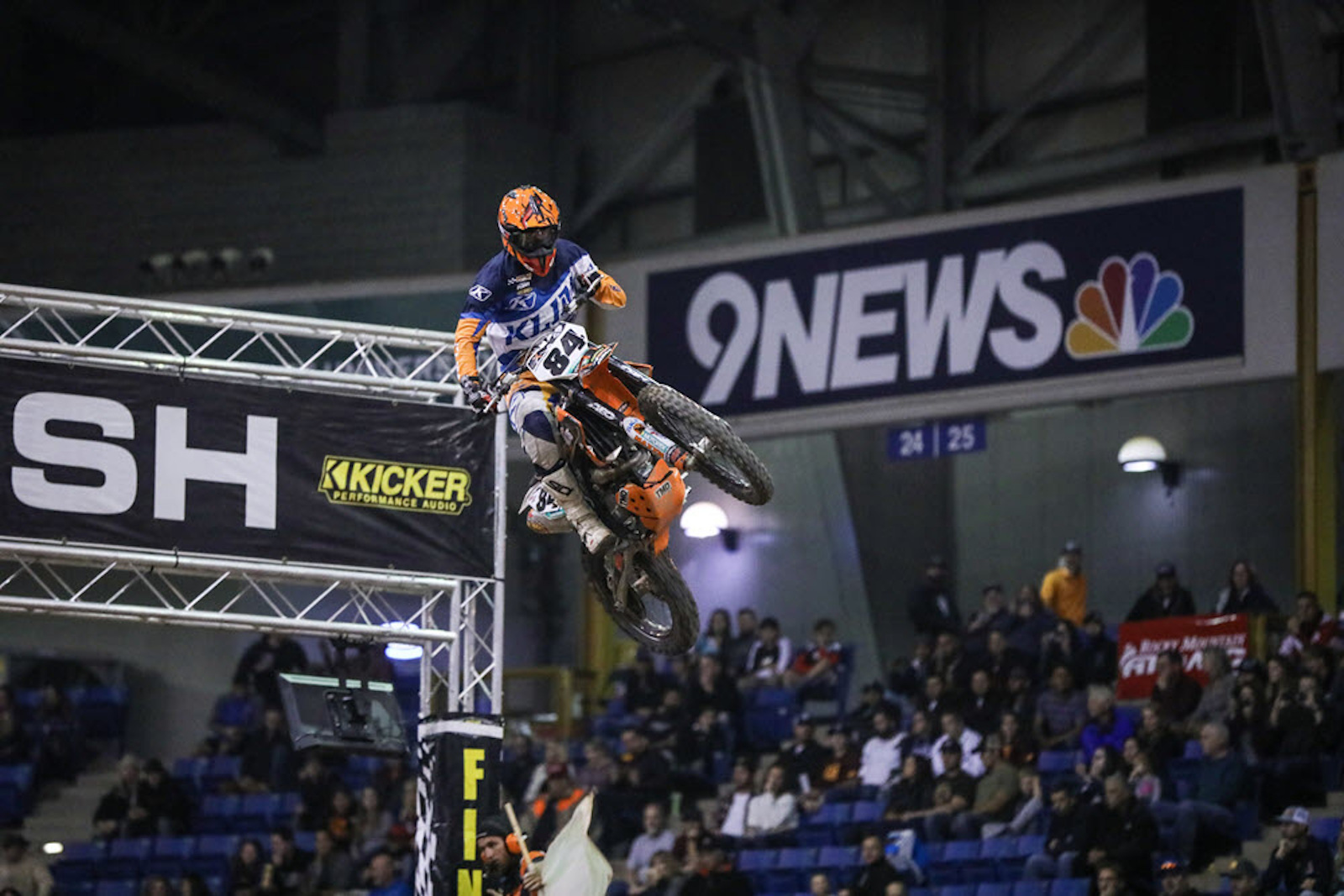 Hart came out of turn one with the lead in moto three ahead of Kepple and Cullins. Blazusiak had a good start but was pushed a little wide and then he and Haaker collided on the second jump putting them both on the ground. Blazusiak got up pretty quickly and rejoined the race and completed lap one in ninth. Haaker’s leg was stuck in his bike and it took him a lot of time to get going well behind the field.

Up front, Hart rode a flawless race to take the moto win. Blazusiak managed to work his way up to second place on lap five of nine and closed the gap a little on Hart but settled for second in the moto, which was more than enough for the overall win.

Gerston finished third in the moto while Haaker had to slice through the field and passed Cullins for fourth on the penultimate lap. That position was just enough to edge out Hart for second overall. Gerston finished fourth overall with 4-6-3 results. Cullins rounded out the top five overall with 5-4-5 scores. 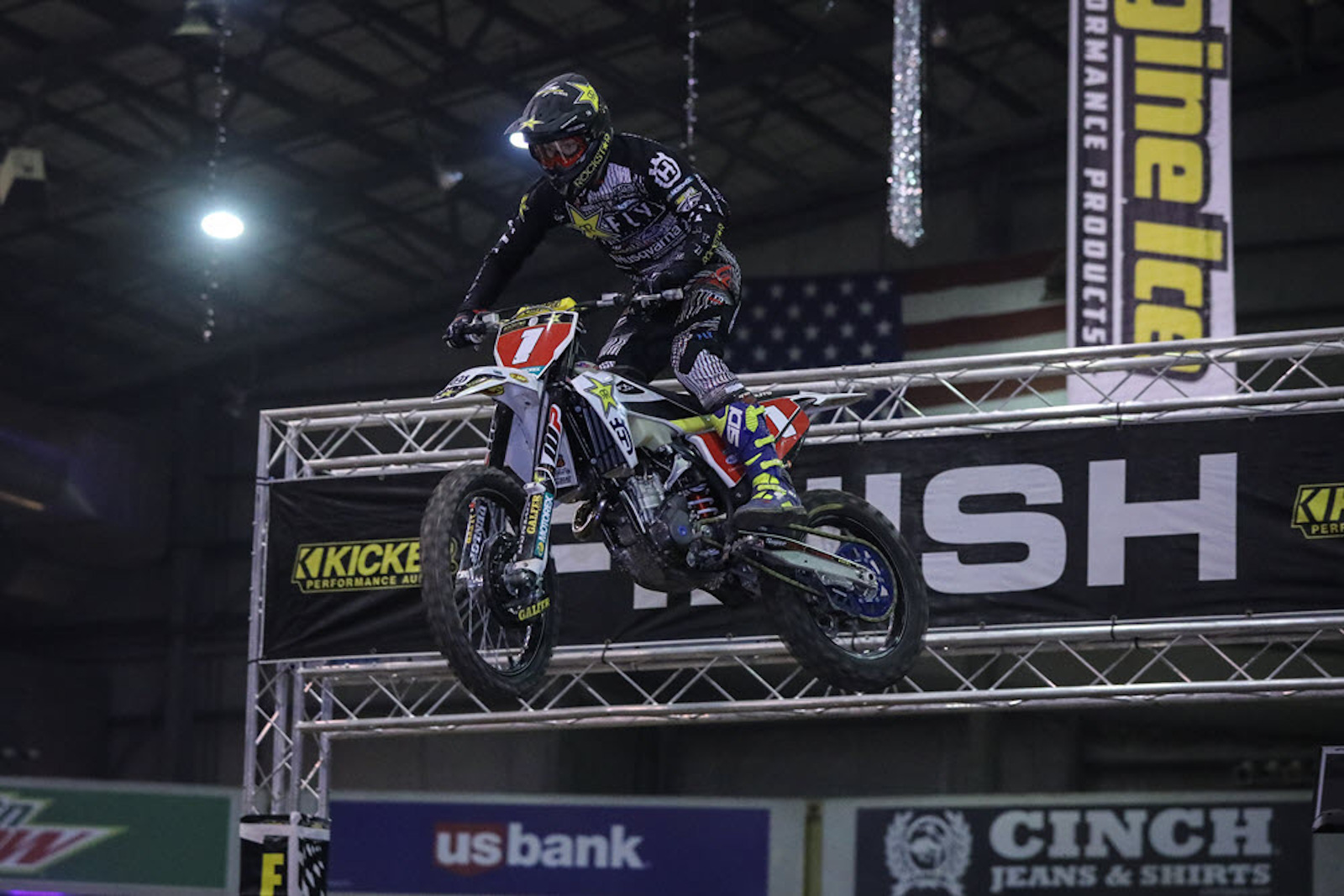 Taddy Blazusiak: “Awesome night, the racing was awesome, the track was good and the pro lane was good. It wasn’t too technical but still challenging to race on. The team did a lot of work with the bike since round one. I have been working really hard at home and everything went super smooth. So I am really happy with the race.”

Colton Haaker: “The whole night had a lot of chaos. The first two motos were pretty good and then in that final moto, I came out of the first turn with some stuff going on in front of me and I got in the middle of it somehow. It wasn’t my best night, I have had really good nights in Denver, I have always done well here but it is not always your night.”

Trystan Hart: “That was really good, it was the first time have been able to beat those top two guys straight up and I have been working at this for seven years now. So hopefully I can bring that to Boise and have another good night. That was my fourth time leading in the six motos so far this year and I was stressed out on those last two laps because Taddy was inching up on me but I was able to get the win.”

Turner on the gas for Women’s class win 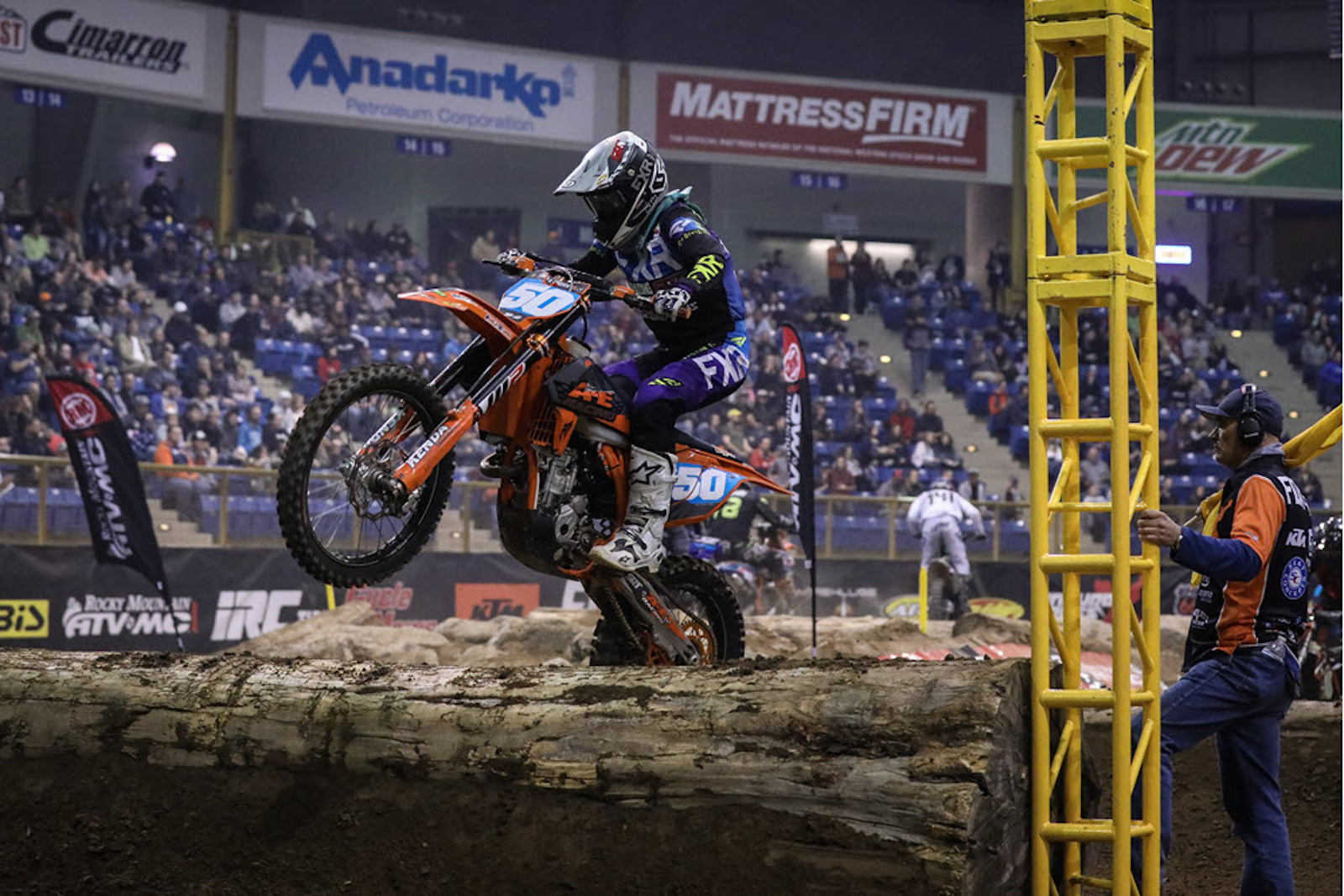 Shelby Turner took her second win in a row after leading every lap in the Women’s class. Beta’s Rachael Gutish finished second and former Women’s champion Maria Hahn (Forsberg) rounded out the podium.

Prior to winning the Women’s main event, Shelby Turner made history by becoming the first female to win the Intermediate class. She had to work hard for the win over a tough field that started with 37 riders going into the morning qualifiers. Fellow Canadian, Cole Wilton worked his way up to finish second and Colorado local Tell Gore rounded out the podium.

Destry Abbott rode his KTM 300 two-stroke to the Vet 35+ class win. Canadian Michael Dobovich finished second and Craig Thompson rounded out the podium on his SRT Husqvarna. For the first time, there was a 50+ Masters class, sponsored by My Door Company. Fifty-year-old Andy Hitch took the win over Michael Kellogg and Mark Blackman.

The final EnduroCross round of 2019 takes place next Saturday, October 26 in Nampa, Idaho.