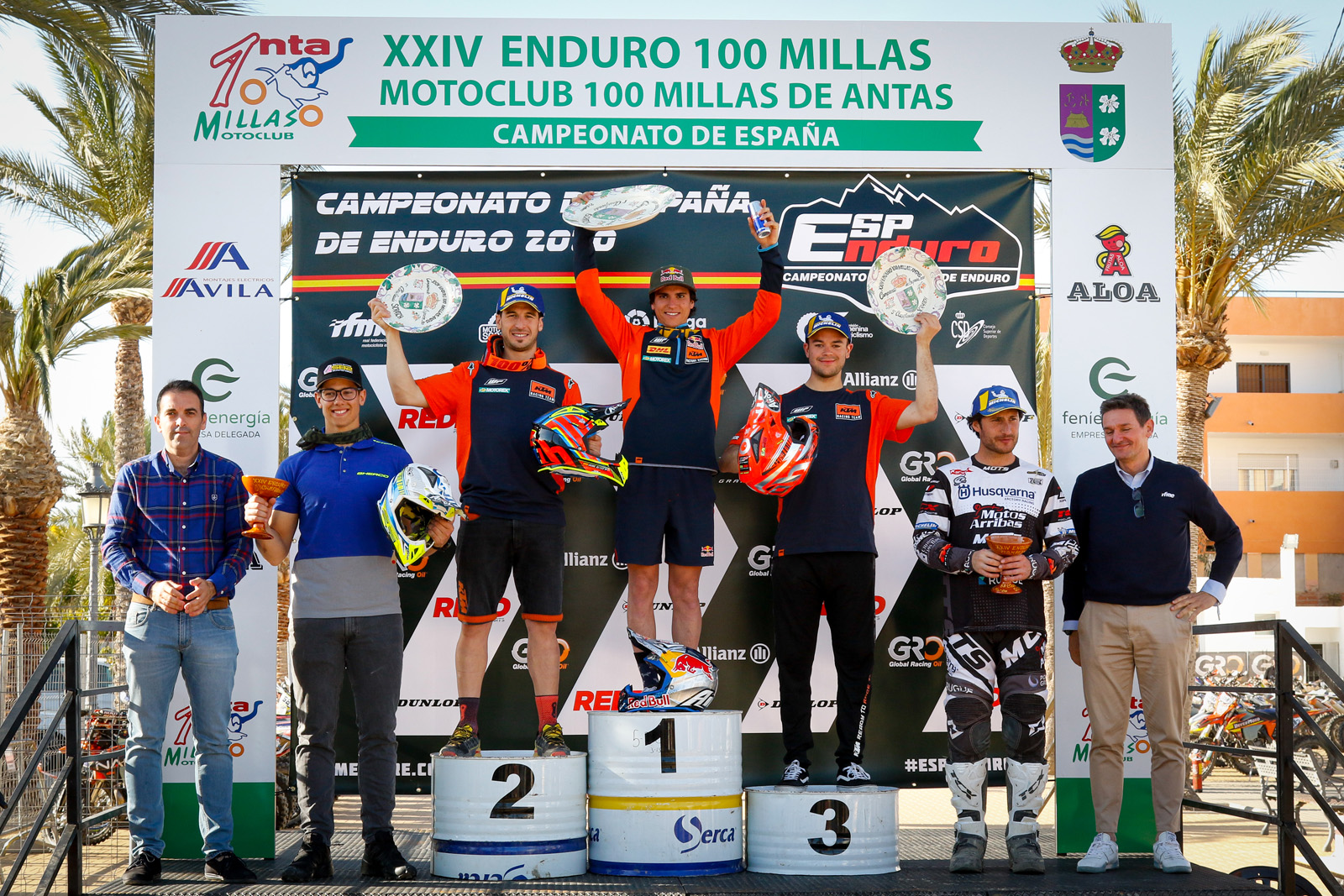 Josep Garcia stepped on to a new bike and a new class in the opening weekend’s action in the 2020 Spanish Enduro Championship but the result was the same, a double win in both the E2 and Scratch class.

The Spanish national series opened the season in in Antas, Almería with the Friday night Supertest which Garcia duly won. Josep carried that into day one proper and with “total authority” took victory by more than a minute and a half over his nearest challenger.

Starting the second day with the same blistering pace Garcia then took a fall in the dusty cross test on the first lap:

That wasn’t the worst of it. A second crash in the extreme test injured one of Josep’s fingers left him in considerable pain still with two laps to go. Even so, Garcia managed the pain, took the victory and with it 25 points which puts him on a maximum 50 form this opening weekend.

Rider quotes and winners by class: 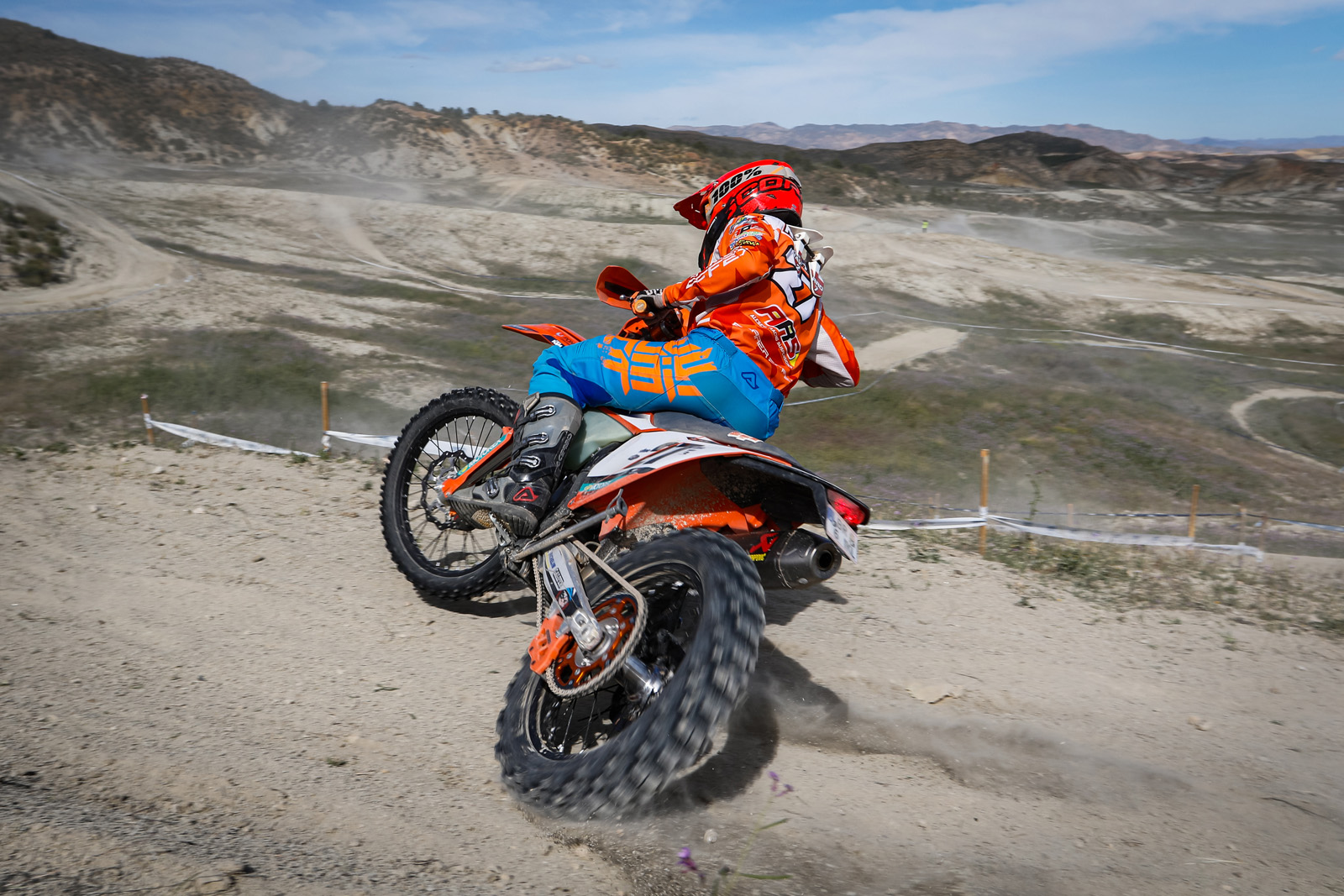 “I’m really happy with the team, bike and set-up, everything is new for me this year and I’m adapting well. On Saturday despite not having the best feeling on the bike I was able to win the class and on Sunday I was feeling better but a crash in the liaison and then having a special tests cancelled, a rider took a big crash, slowed me down. I’m really happy about the weekend and I’ll try to improve for the next one.” 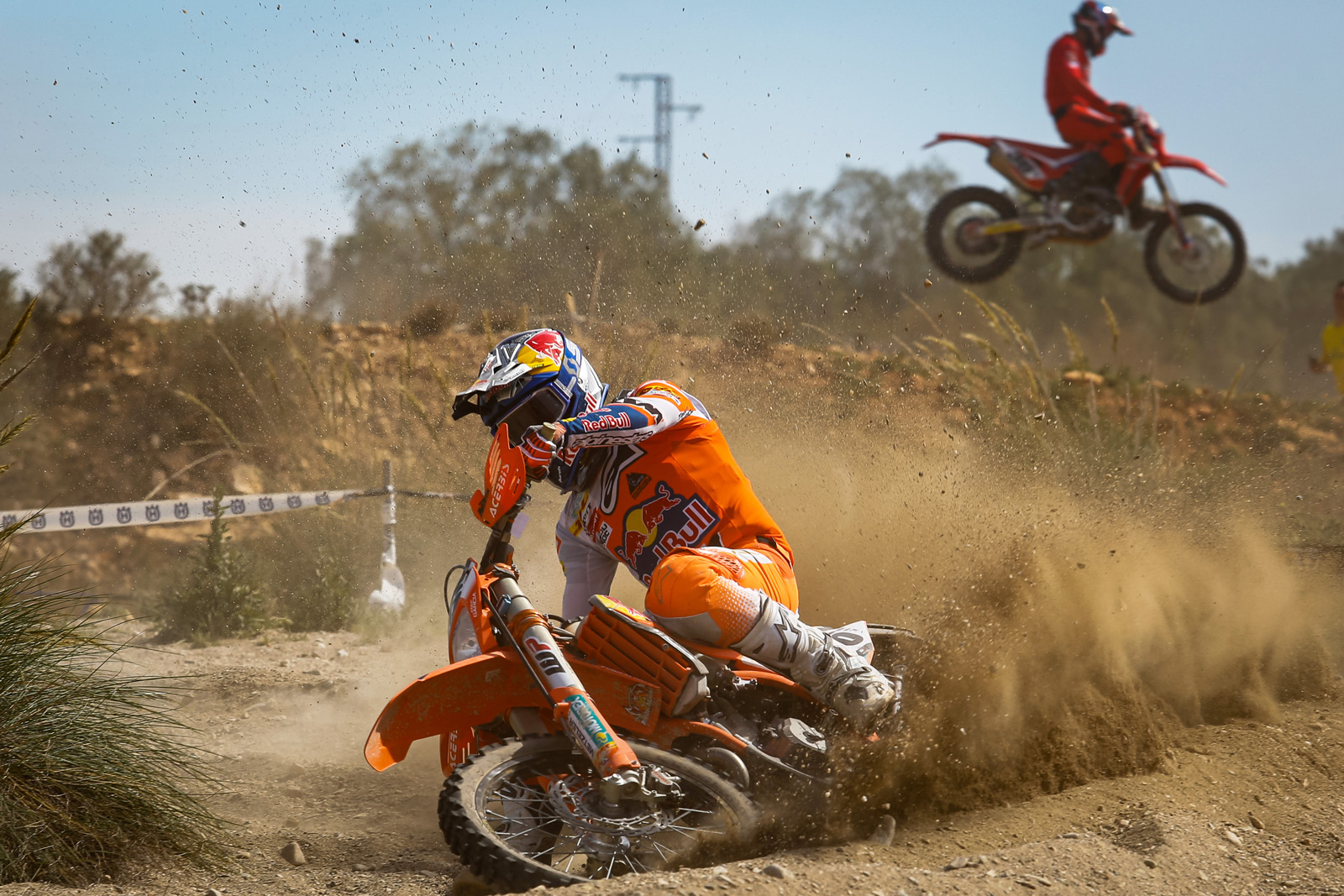 “I made a mistake on the Friday Supertest but luckily I was able to post the fastest time. On Saturday everything felt like it was on rails with the new bike and new class, I didn’t make any mistakes, just small ones, and I was really feeling it.

“On Sunday I went out with the same mindset, to go out and have fun. I was the fastest on the first test, seven seconds ahead of the second rider, but then I had a big get off on the cross test. I got caught on a dust patch and I went over the bars but I was able to continue. “Anyway, I had a really small crash at the extreme test and I’m not sure if I have dislocated or broken a finger. I was riding in pain for the whole day, but I saved the day and was able to take another win. I’ll head home now and get the doctor to look at it as soon as possible.” 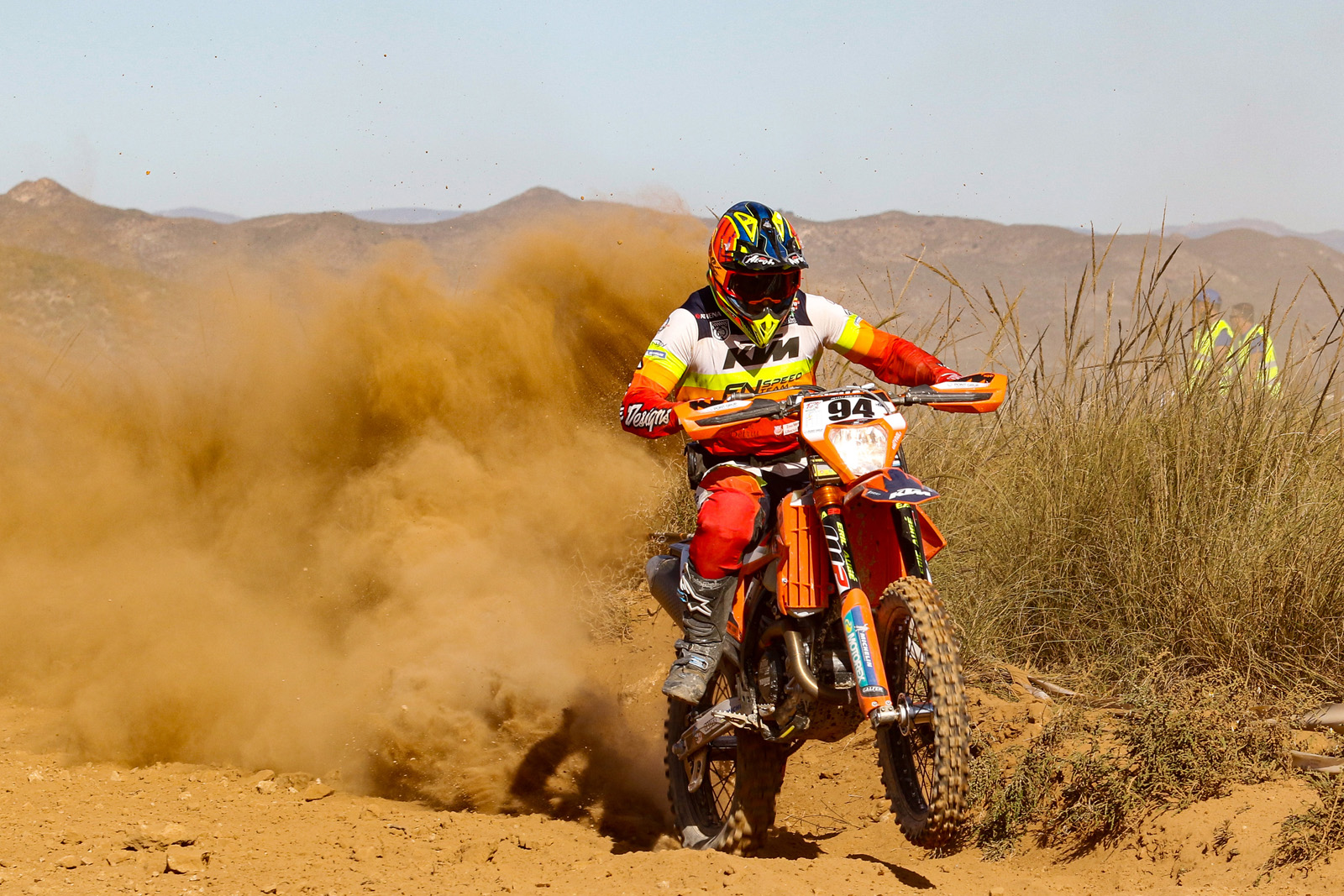 “It was a good weekend for me. I was looking forward to racing here to adapt better to the 500 and it was a great weekend, especially considering I only had a week of training on this bike.

“I started my enduro preparation the week before Bassella and even if it has been a short pre-season it seems to have work, I was feeling really good this weekend. The terrain here is always tricky, it’s very dry and it gets rough fast and the special tests were really intense with really short liaisons between them.

“On Sunday I was feeling tired from Saturday, I think I still lacking that intensity after having been training resistance for the Dakar during the previous months. Anyway, I was able to put on a fight with Marc Sans and Enric Francisco, Josep is on another level, and I took the win after being the fastest on the last extreme test. In short, I’m really pleased about the weekend.” 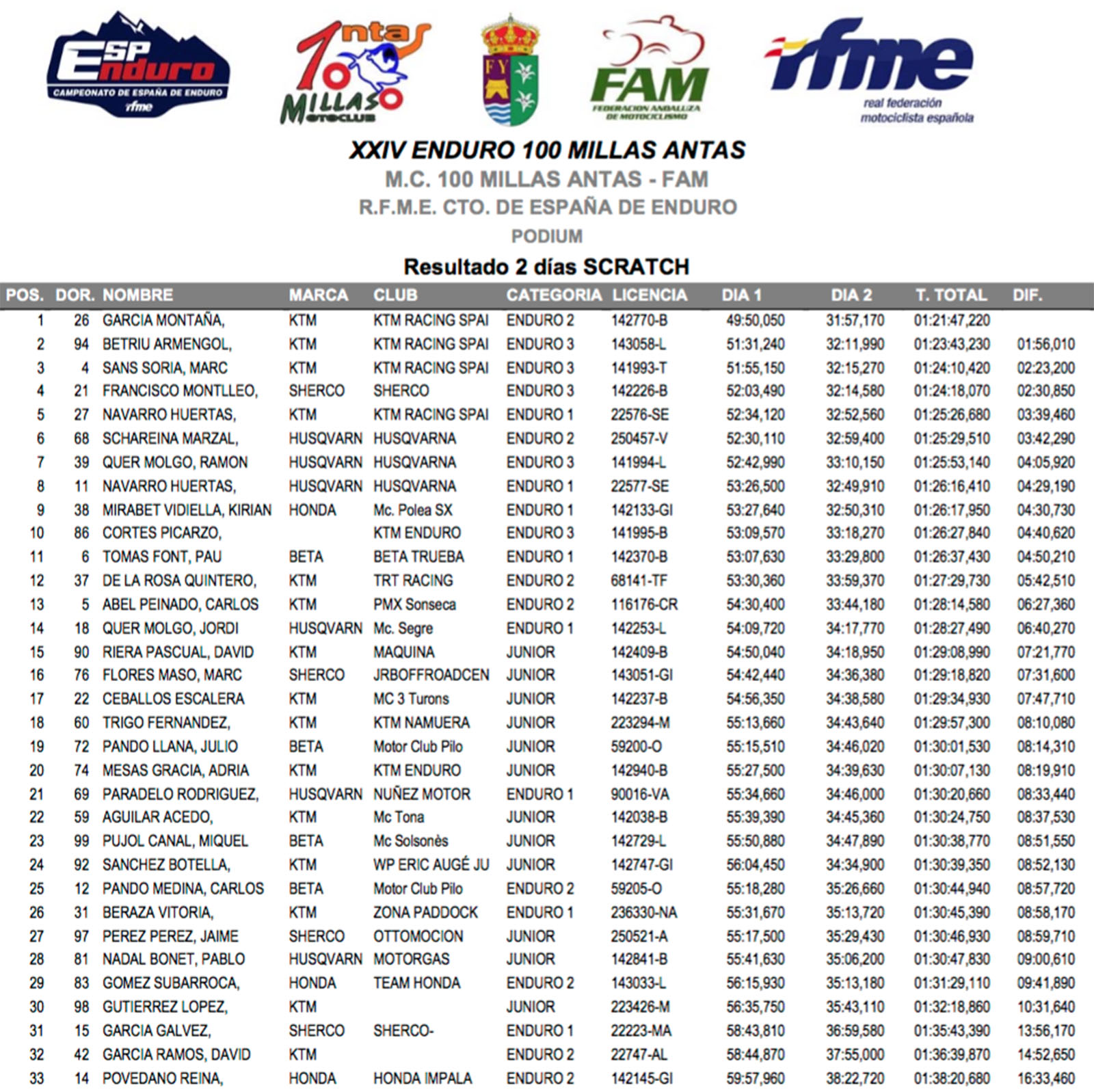 The second round of the Spanish Enduro Championship will be held on March 21st and 22nd in Valdecaballeros, in the province of Badajoz.