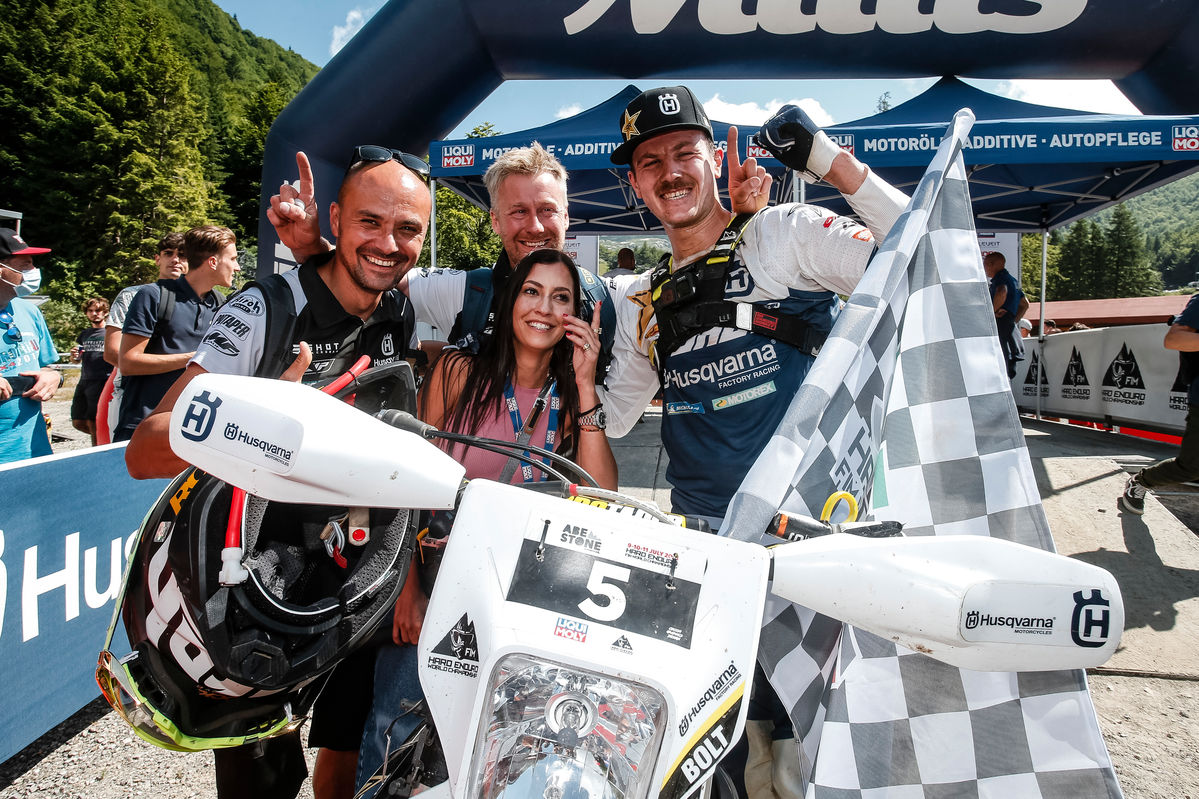 Ride onboard Billy Bolt’s Italian Job winning ride at the Hard Enduro World Championship round in Italy, the Abestone Hard Enduro. Follow the action with Billy as he scales the rocky riverbeds, unreal mountain boulder fields and watch the rider’s eye view as he battles with Mani Lettenbichler for the race win.

Speaking this week, post-race win, to the HEWC series promoters Bolt says it was an intense race: “It was hard to have a game plan for Sunday as it was a relatively short and intense style of race. I felt like the river sections would play to my advantage and I could be stronger there with the lines I was doing.

“Mani had a gap at the end of lap one, but I managed to catch him back and pass him in the river. From there it was a matter of not looking back and giving it everything.”

Here’s the full interview with Billy by the Hard Enduro World Championship...

Billy, congrats on a perfect weekend at the Abestone Hard Enduro. Did you think it would go as well as that?

Billy Bolt: “Thanks, I guess you could say that it was a perfect race. Of course, I wanted to win, but I wasn’t quite expecting it to go this well. On Friday and Saturday I felt like my speed was there to deliver in Sunday’s final, but with it being a new event for everyone you just never know.”

Topping Friday’s timed practice and then going 3-for-3 on Saturday must have put your confidence sky high heading into Sunday’s Super Final?

“Yeah, it was a great start to the weekend, but I knew Friday and Saturday didn’t relate too much for Sunday. Also, I figured some guys were holding back and Sunday was when they would push.”

Both you and Mani had some incredible battles on Sunday - knowing it was going to be hard to shake him off, did you have a game plan of when to attack for the win?

“It was hard to have a game plan for Sunday as it was a relatively short and intense style of race. I felt like the river sections would play to my advantage and I could be stronger there with the lines I was doing. Mani had a gap at the end of lap one, but I managed to catch him back and pass him in the river. From there it was a matter of not looking back and giving it everything.”

What’re your impressions of Abestone Hard Enduro and what this new venue has to offer looking forward?

“What was achieved for the first edition of this race was really promising and it was such a welcome addition to the calendar. For their first go, Michele Bosi and his team did an amazing job. I, like so many other guys, was massively impressed with the venue and the potential for it to grow into one of the biggest races of the year.”

Despite winning at Extreme XL Lagares, did you feel you needed to prove yourself ‘outdoors’ at Abestone?

“Obviously, with how racing has gone over the last year it’s been pretty frustrating because I feel like I’ve been at this level for a while now, but unable to show it. It’s nice to finally get somewhat back to normal and focus on racing. Although Extreme XL Lagares was just the Endurocross race, I was still ready for the outdoor stuff.”

Red Bull Romaniacs is next on the agenda - an event that’s delivered mixed results for you – will you be changing anything coming into it, compared to previous years?

“I won’t change too much heading there. Last year I felt like I got a better grasp on it with a day win, so I’m focused now on trying to put together a full week.”

Is the goal to podium or better in Romania?

“The goal is always to win every Hard Enduro race I do. So far Red Bull Romaniacs has been the hardest for me to gel with, but I know winning there is achievable now.”

Finally, you seem to be in a really happy place right now – health, team, bike, life and having fun - is that making a difference to your riding?

“I feel like I’ve been in a happy place now for a while and it’s finally showing out on track. I feel like the balance is right, my program and setup is right. You’re always learning as a rider and now I think I’ve found the right mix of training and riding for me. The vibe is always good under the team awning between Graham, Alfredo and myself and that makes being at the races fun. So, I feel like a happy rider definitely translates to a fast one.”

The FIM Hard Enduro World Championship continues with round four at Red Bull Romaniacs on July 27-31.