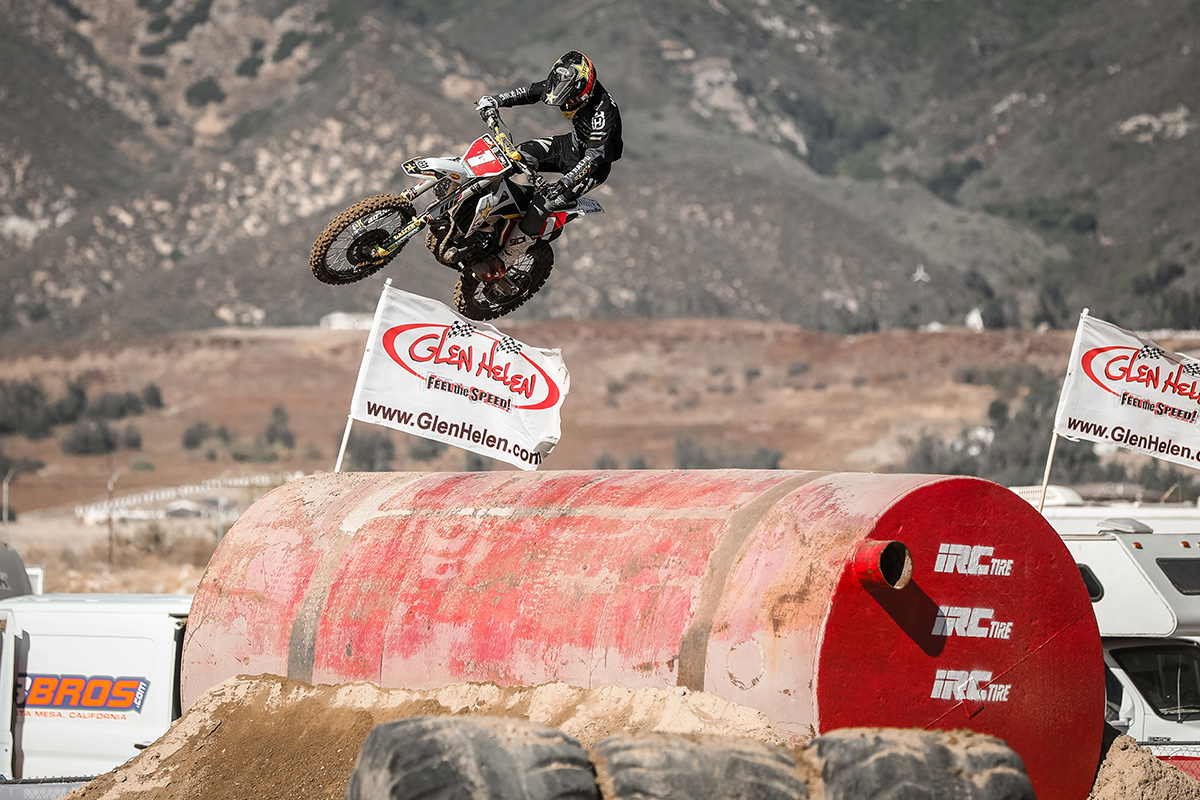 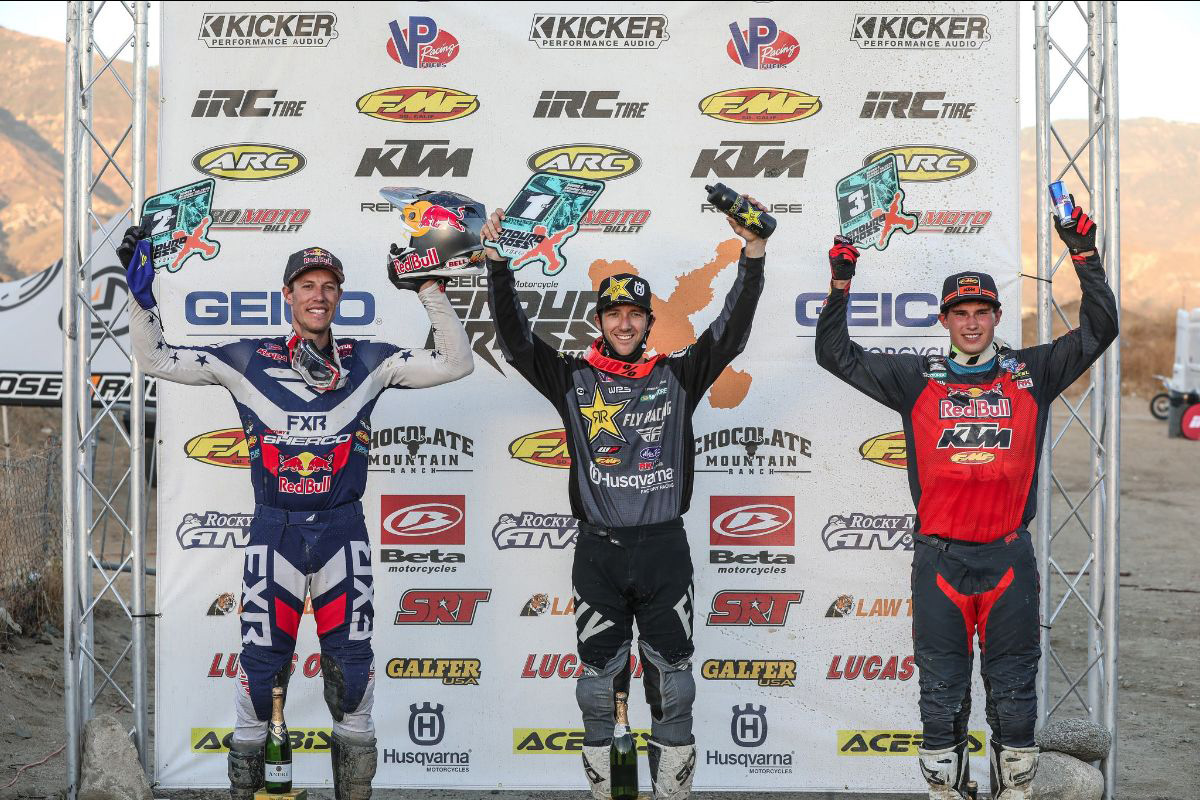 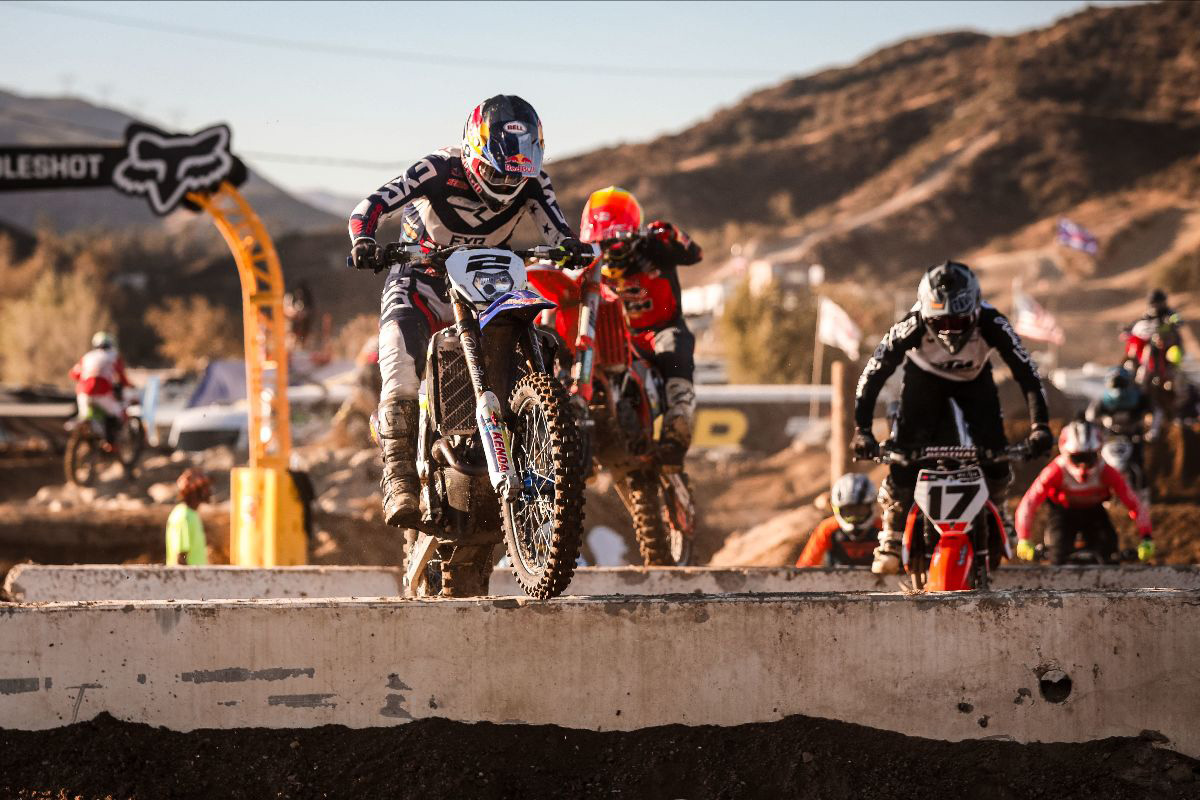 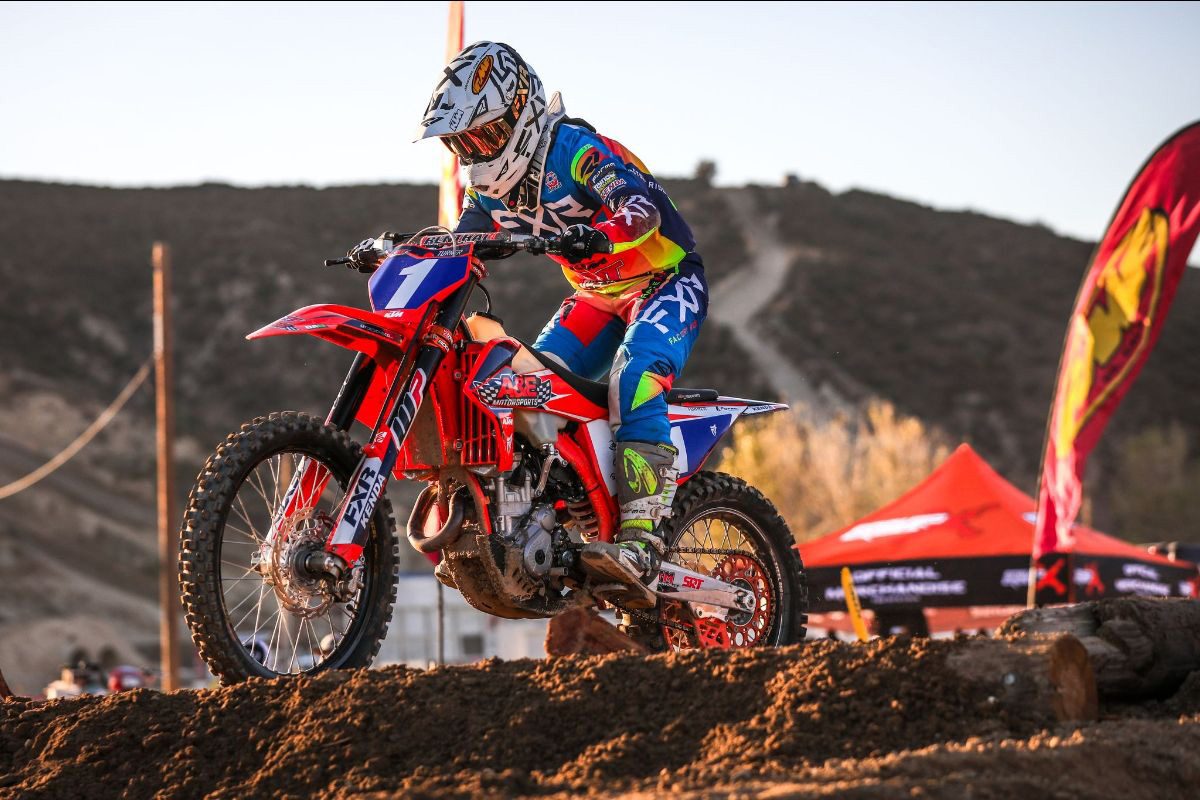 After another close battle which went down to the final moto, Rockstar Husqvarna’s Colton Haaker has taken his third win of the 2020 AMA EnduroCross series at round four to grow his points lead ahead of Trystan Hart and Cody Webb.

Across the three motos at Glen Helen Raceway the battle again raged between Haaker, FactoryOne Sherco’s Cody Webb and FMF KTM’s Trystan Hart with Colton’s 3-1-1 scores just a little better than Webb’s 2-2-2 moto finishes for the overall win. A crash at the start of the decisive final moto gave Hart a lot of work to do and ultimately his 1-3-3 finishes placed him third overall. 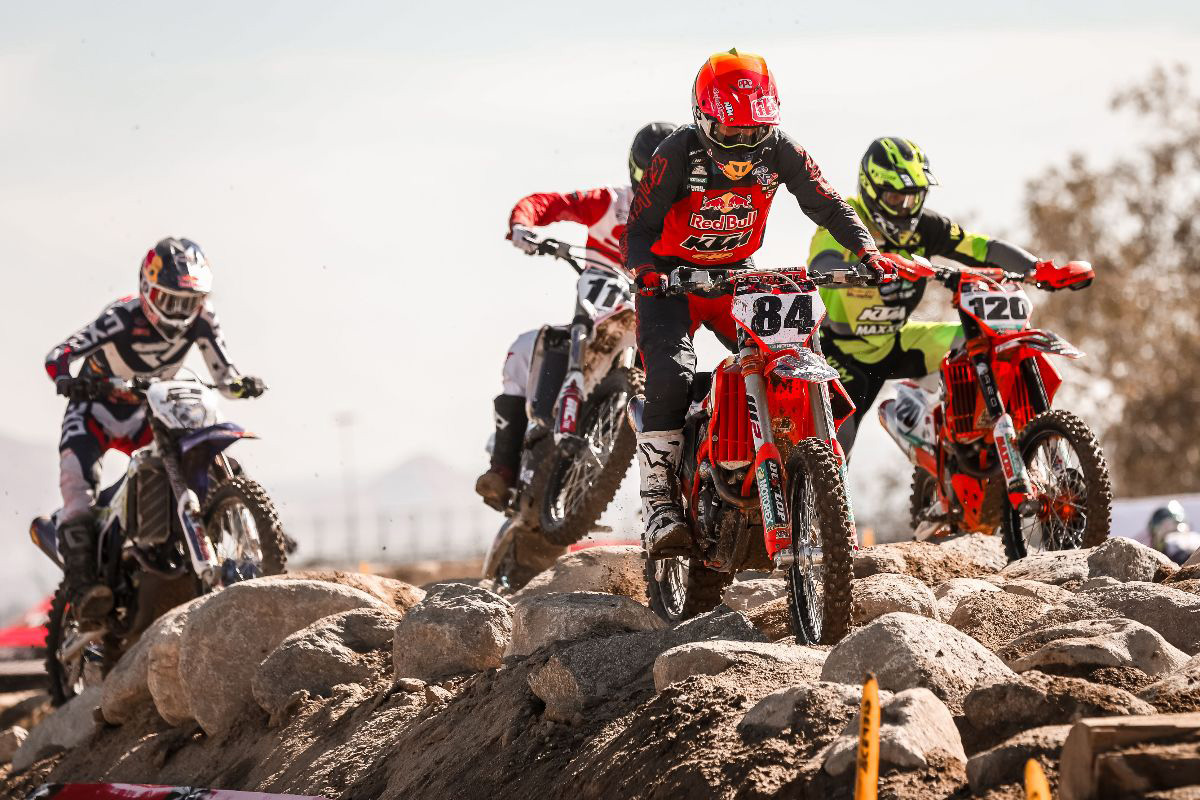 Hart then converted to take the moto one Fox Holeshot just ahead of Haaker and the two battled for most of the race until Colton made a mistake and dropped to third. Webb was keeping pace with the two leaders and happily inherited P2 but was unable to get close enough to make a move for the win. RPM KTM’s Abbott finished fourth ahead of SRT Yamaha rider Cory Graffunder.

With the gate positions reversed, moto two can often be the critical one for the overall as riders move through the pack. Danny Lewis took the holeshot on his Husqvarna but it was sixteen year old Angus Riordan that took the lead by the time the riders crossed the finish line to complete lap one.

Graffunder then briefly hit the front but Haaker got by and held the lead to the finish. Webb also put in a strong moto to get close to Haaker but had to settle for second. Hart was slower to move through the pack but eventually made it to third, leaving the top three riders tied on points going into the final moto. Abbott was fourth again in moto two with Beta’s Max Gerston fifth.

Hart blasted to the front to take his second Fox Holeshot in the final moto but crashed on a simple rhythm section, dropping him to 16th. Haaker took over at the front and rode a steady pace with Webb closing the gap and eventually making a pass when Haaker made a mistake in the Rocky Mountain ATV/MC rock garden.

A win would give Webb the overall but a mistake in the same rock section handed the lead back to Haaker who held on until the finish to take the moto and overall win. Webb was second while Hart came all the way back to third.

Say what? Pro rider recap from round 4:

“Each of my three wins has come with its own set of challenges and tonight was no different,” Haaker said. “I had a mistake in the first moto that cost me the win and put me behind the eight ball but I managed to turn it around in the next two races. I’ve been dealing with a back injury since Round 2 that has gotten progressively worse with each round due to a lack of a break in the schedule, but we’re getting through it and making the most of the moments that count. Two more to go and I’m excited to close this thing out with a stamp on the season!

“I injured my back during my practice crash at round two so I had to go see Ty Davis (former champion racer) to use one of his tricks to help relieve the pain and loosen me up. I am hoping to get a 1-1-1 score at one of these last two rounds next week.”

“Today’s track was more technical and that helps me ride looser.” Says Webb, happier with the track design. “The first three rounds had some jumps and obstacles that were so fast that I was struggling to ride loose. So today felt good to be in contention for the overall speed wise. I have been doing long, steady billy-goat type Extreme races so I am getting my intensity back. We have two more races to get a win.”

Hart meanwhile was on his way to the hospital to check out a hand injury after his final moto crash. “It was going good, I won the first moto and we were all tied going into the final moto. I got a good start and just cased a jump on the first lap and went over the bars. So that was not the night we were looking for but I was able to come back to get third.” 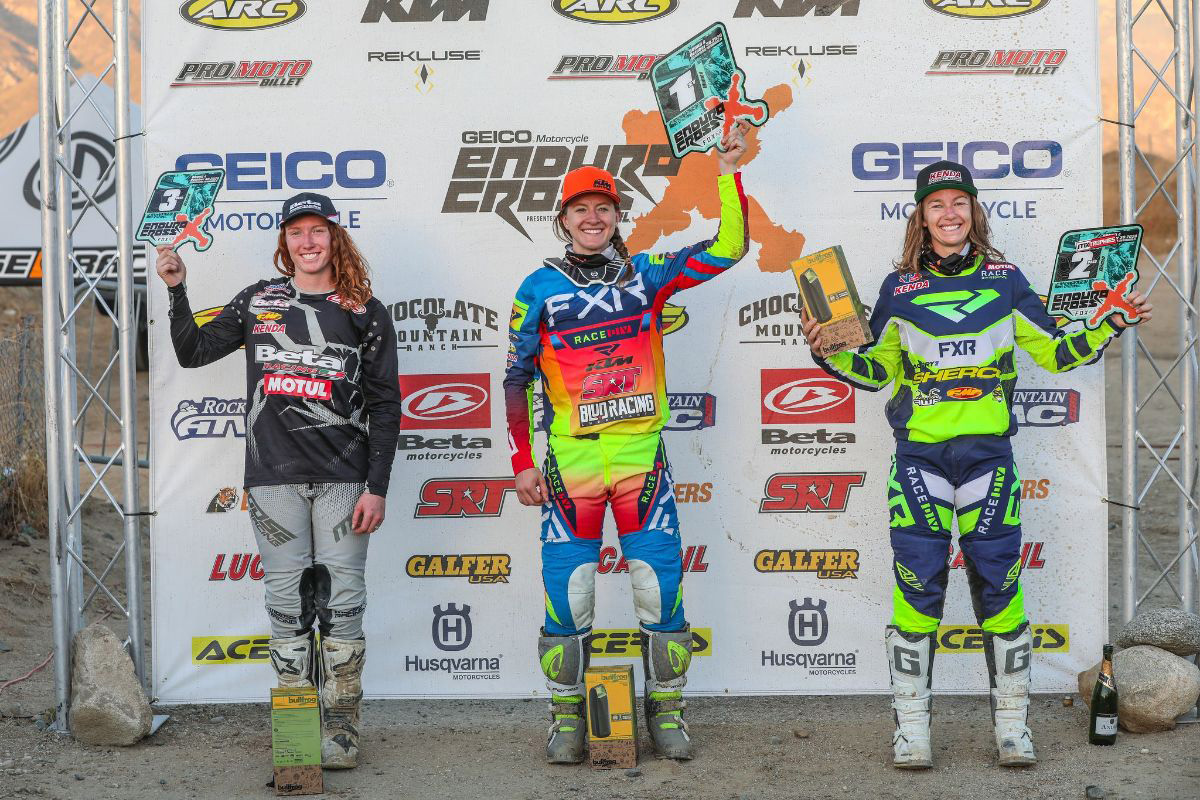 Shelby Turner is putting together a perfect season having raced to her fourth win in a row on her KTM. For the third race in a row, Louise Forsley finished second on her Sherco and Morgan Tanke finished third to complete a by now very familiar podium in the Women’s class.

In the Amateur/Intermediate main event, Joshua Fout took his second win in a row riding a Yamaha. Tyler Smith was second on a Husqvarna and Ryan Gouveia rounded out the podium on a TM, matching the overall podium results from race three.

In the Vet 35+ class, round one winner Ryan Gouveia took another win on his TM. Craig Thompson finished second on his Husqvarna. Wayne Dickert rounded out the podium on his Sherco.

The final two rounds, originally planned for the Ford Idaho Center in Boise, Idaho have been rescheduled to Glen Helen Raceway (due to Covid-19 restrictions) will take place on November 2 & 3.