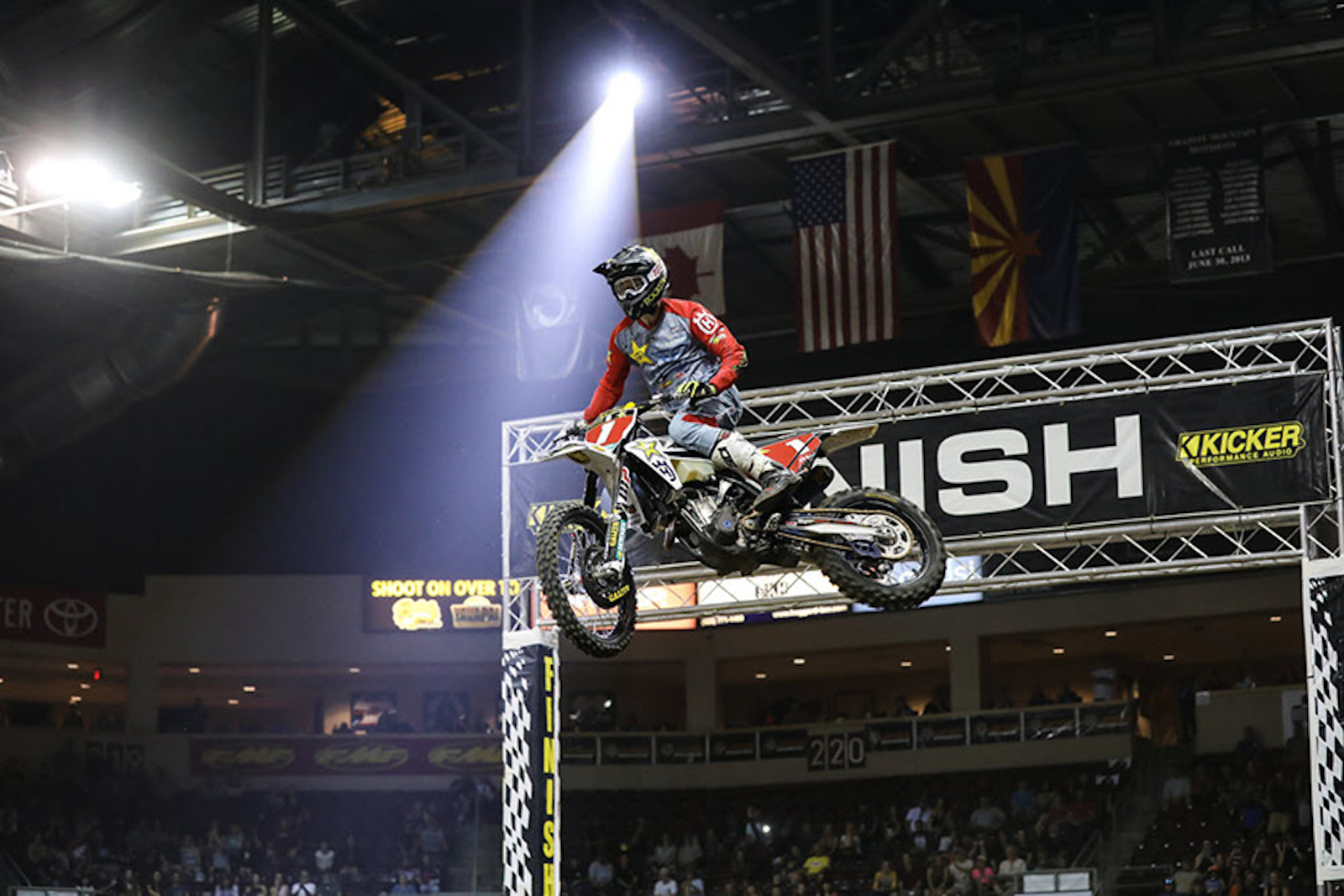 Round one of the 2019 EnduroCross Championship saw Colton Haaker take the win at the Law Tigers Prescott Valley EnduroCross, ahead of Cory Graffunder with Taddy Blazusiak in third.

A near-capacity crowd watched three hot opening motos as the 2019 EnduroCross series kicked into action with the first of three rounds at Prescott Valley.

This was the first time the Super EnduroCross class used a three moto format to determine the overall results and it was Colton Haaker who’s consistency paid off with 2-1-1 scores to take the top step of the podium.

That podium also saw a welcome return for Cory Graffunder who had his best result in a couple of years on the SRT Yamaha YZ250F for second overall. The Canadian had 1-5-3 moto results. 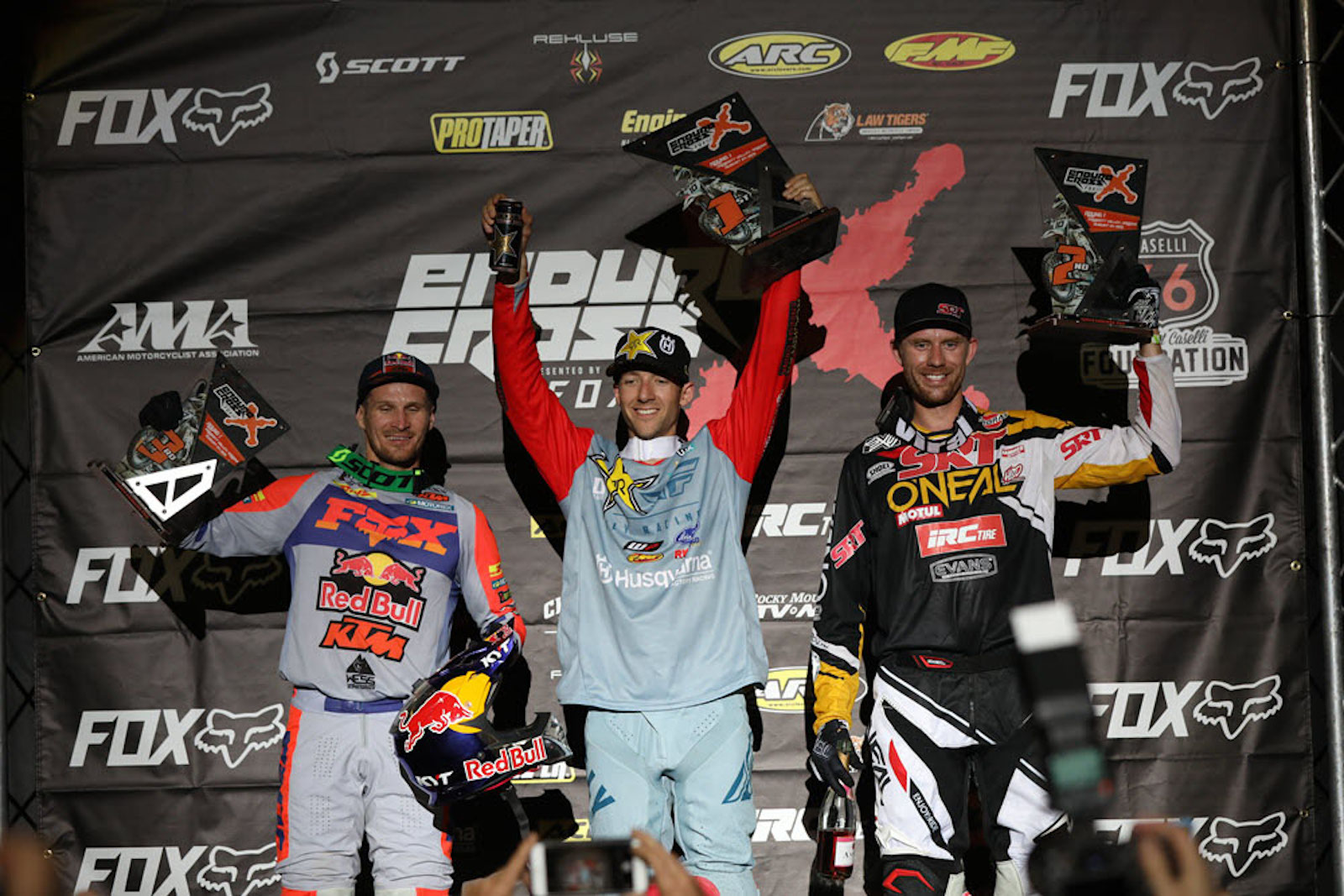 Multi-time EnduroCross champion, Taddy Blazusiak was a late entry into the series drafted in to replace Cody Webb and taking a sabbatical from WESS duties in Europe – Taddy bagged 4-6-2 moto scores for the final step of the podium.

Blazusiak got the day started by setting the fastest time during the Seat Concepts Hot Lap. Beta’s Ty Tremaine, TM’s Ty Cullins, 3 Bros SRT/ Husqvarna’s Noah Kepple and Graffunder rounded out the top five. Haaker got off to a rough start by getting stuck and finishing 12th. 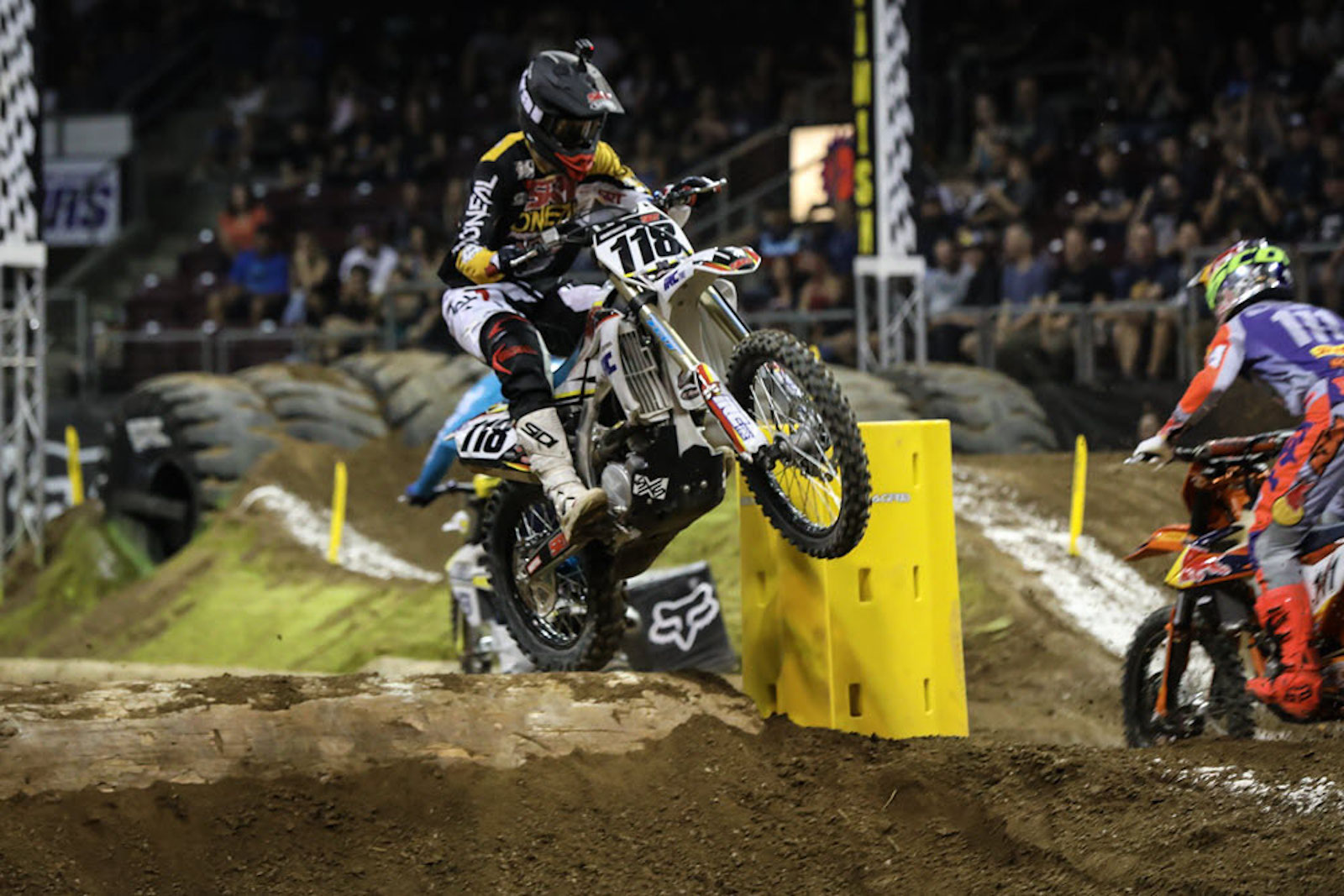 Graffunder started race one in third and quickly moved to second when Blazusiak crashed in the rock section on lap one. Tremaine had the lead and held it for several laps before a big crash in the matrix. Graffunder who took a comfortable win.

Haaker had a second-row start but quickly moved up into the top five before a big crash. He came back through the pack to take second late in the race despite a twisted bike. Cullins had a strong third while Blazusiak and Beta’s Max Gerston finished fourth and fifth.

In moto two, the gate picks were reversed from the moto one results and Haaker took the Fox holeshot from the second row when most of the riders pushed wide in the first turn. From there, he was unchallenged to the finish.

Hart finished second to move himself into contention for the overall podium. Kepple had a strong ride to finish third. Gerston finished fourth. Graffunder was in third on the last lap but a crash in the Matrix dropped him back to fifth. 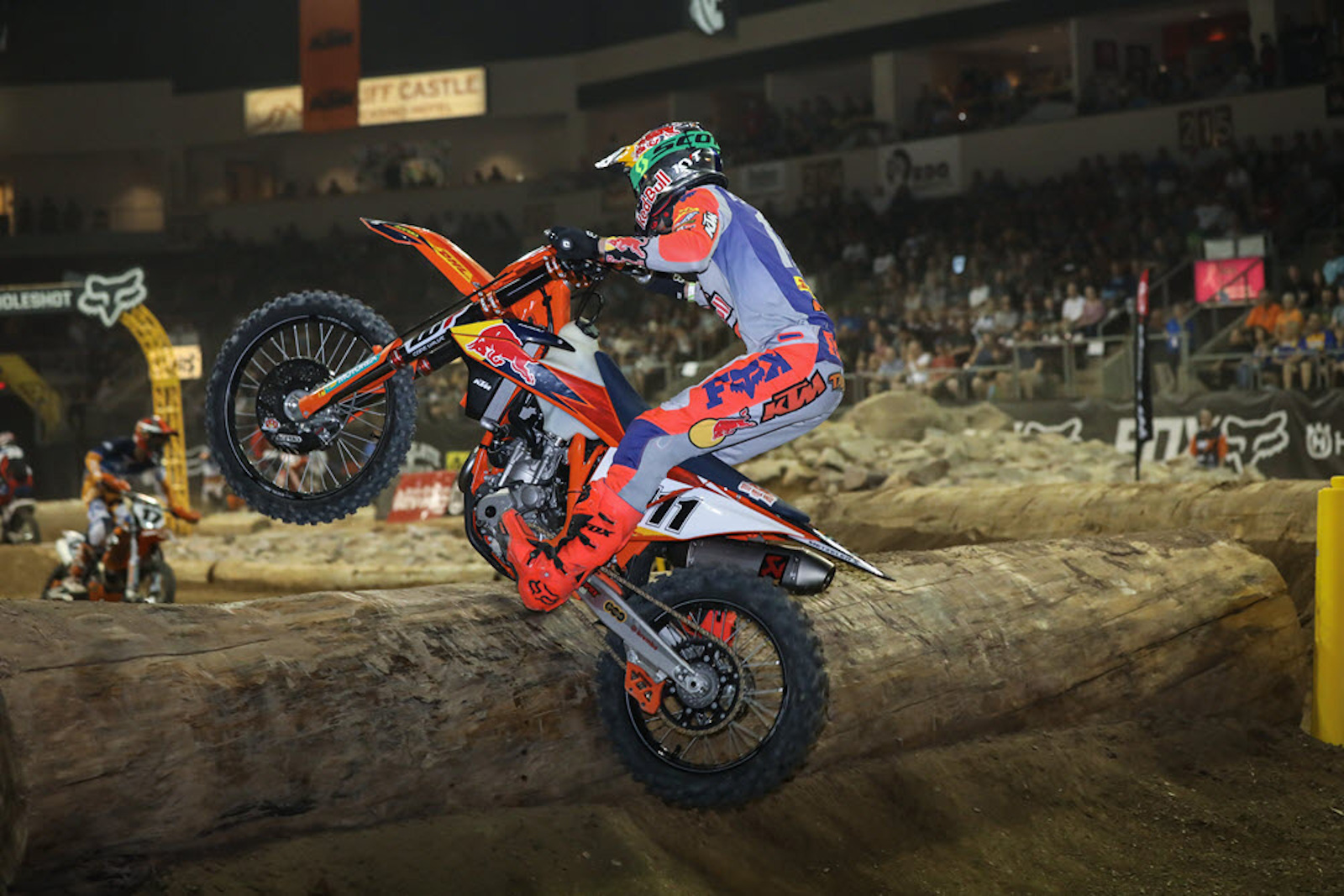 The final moto became a battle between Blazusiak and Haaker. Blazusiak led most of the race with Haaker pressuring him until just before the while flag. Haaker ended up making an aggressive pass and went on for the win. Blazusiak held on for second in the final moto, which was enough for third overall. Gerson finished fourth and took fourth overall as well with 5-4-4 results. Hart finished fifth in the moto and overall.

Colton Haaker: “After my mistake in the hot-lap, I thought it may be a difficult night but I worked my way up to second in that race. Then the second race was amazing with a holeshot from row two.

“In the final moto, Taddy was taking my lines everywhere and I felt like I would eventually get past him. I made a pretty aggressive pass near the end to take the win. This three moto format is familiar for me since I have been racing the world championship and that helped me.”

Cory Graffunder: “Honestly, I was surprised that I was this competitive. One year ago, I was here on crutches and then I had another injury earlier this year. I made a big mistake on the last lap in moto two but then rode strong in the last moto. It is great to be back up on the podium.”

Taddy Blazusiak: “I had some problems in the first two motos but was able to come back in the final with a good finish. I am looking forward to coming back for Denver and Idaho.” 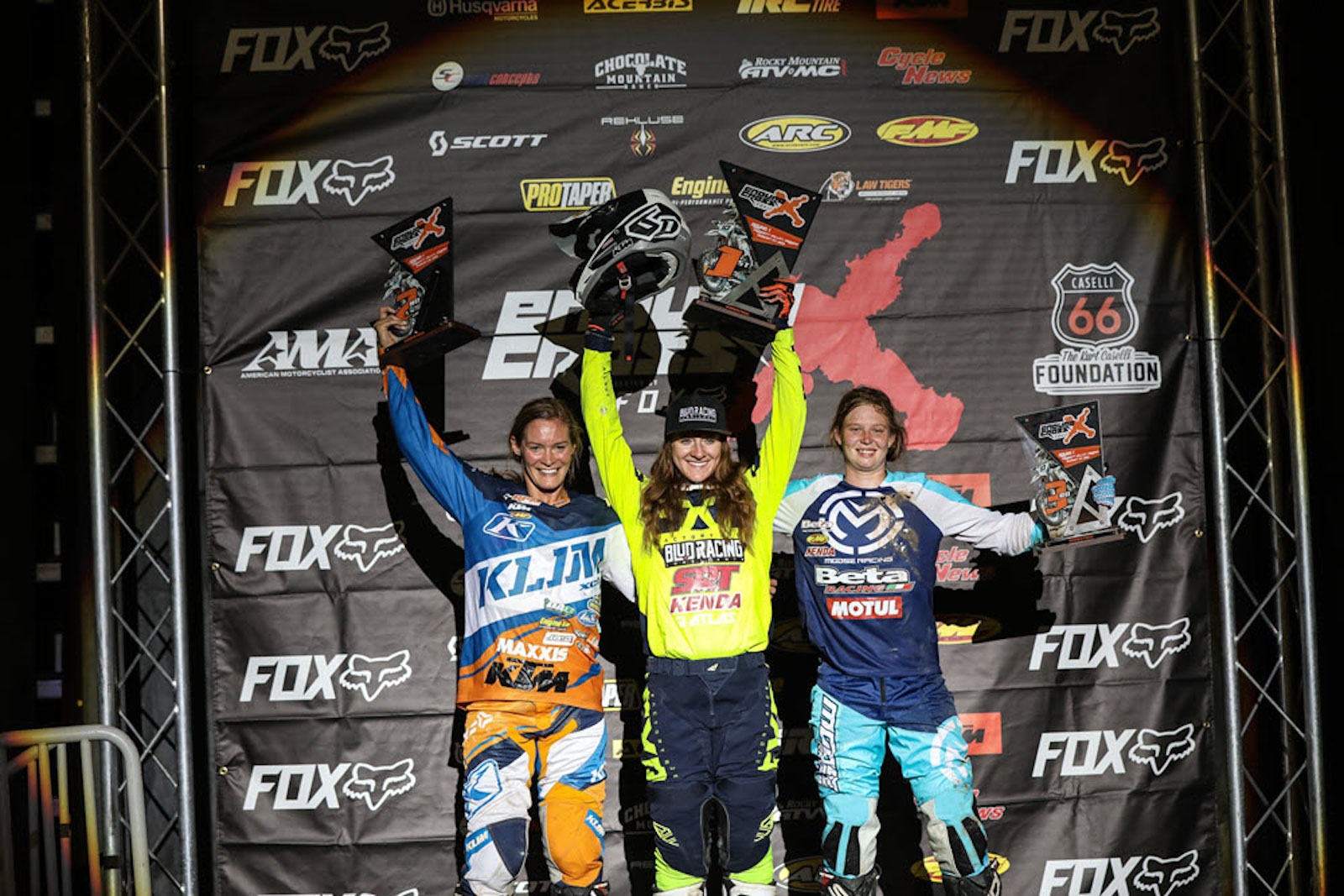 In the Women’s class, two-time champion Shelby Turner took the win over former champion Maria Forsberg. Rachel Gutish had a tough main event with a couple of crashes but managed to get back to the podium.

Each round includes a local club class and Arizona Motorcycle Riders Association (AMRA) race was won by Nick Saia on a Sherco with Nick Mcgowen and Chad Lamaide rounding out the podium. 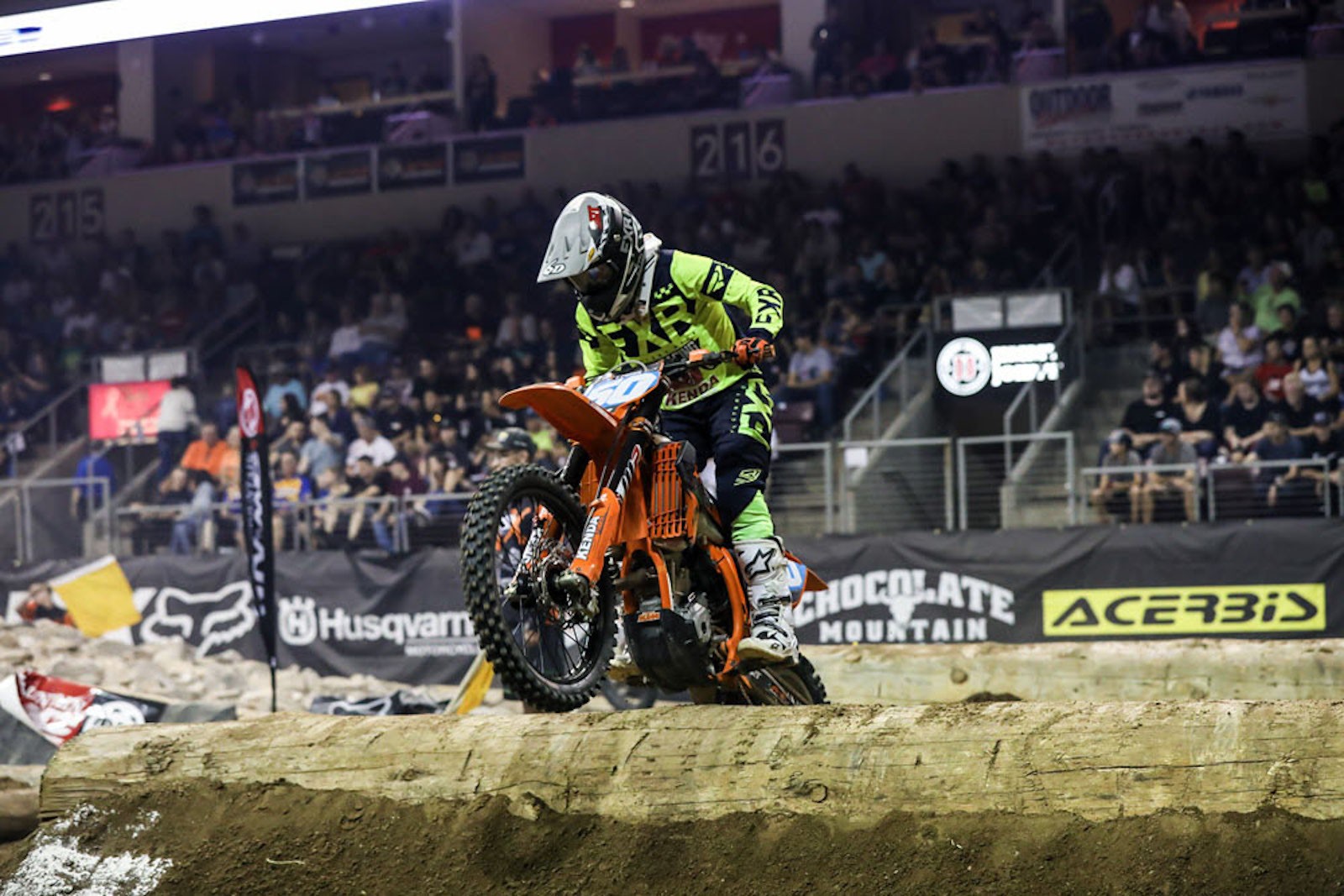