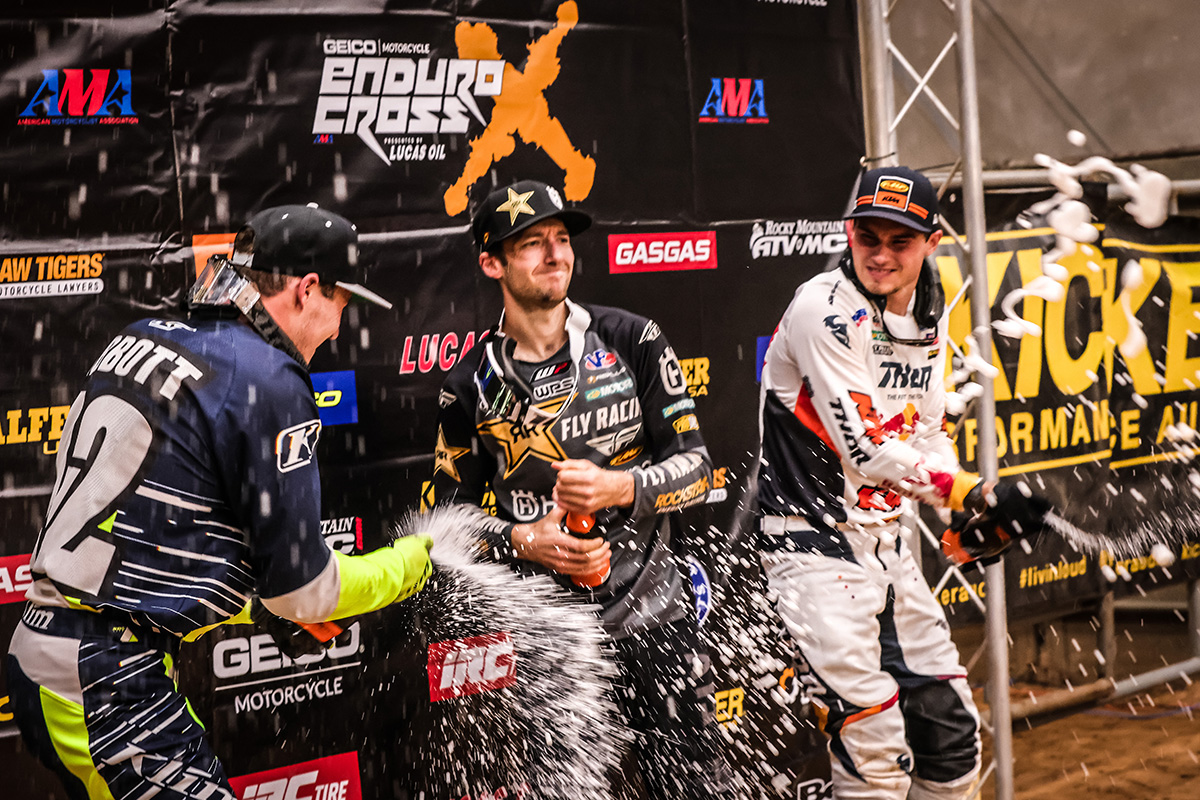 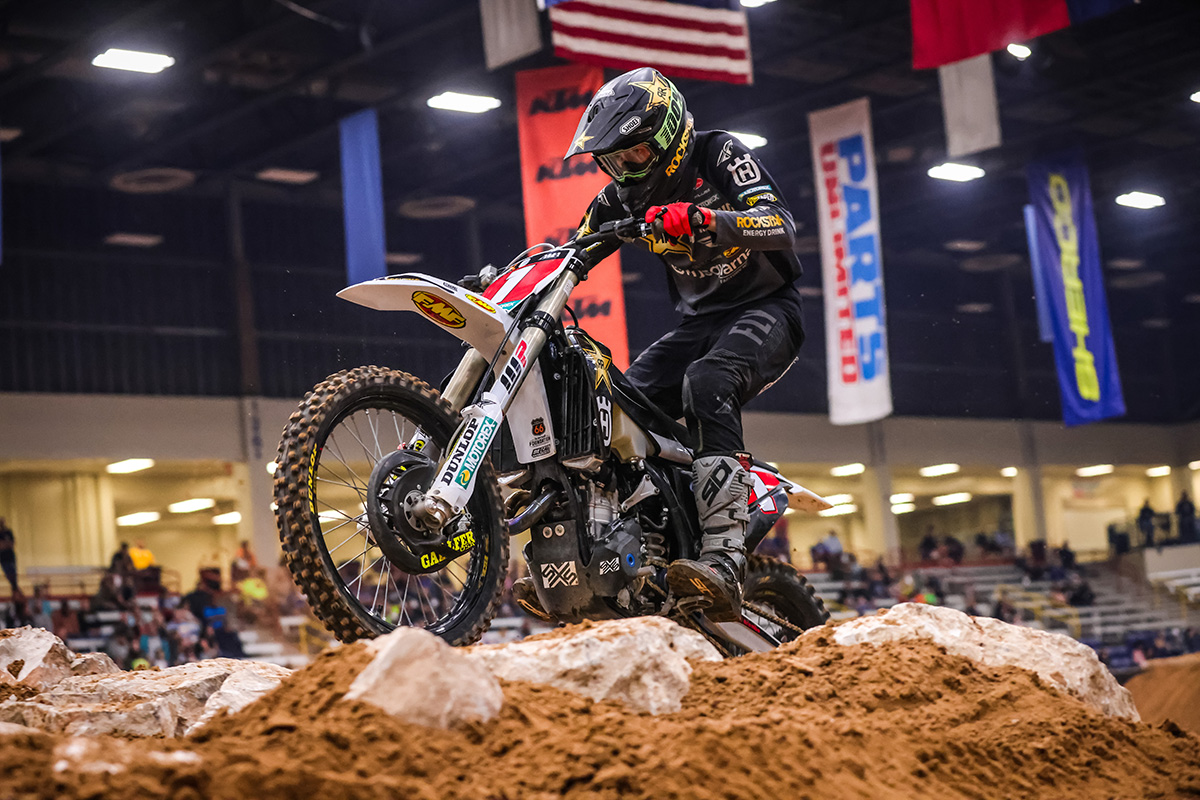 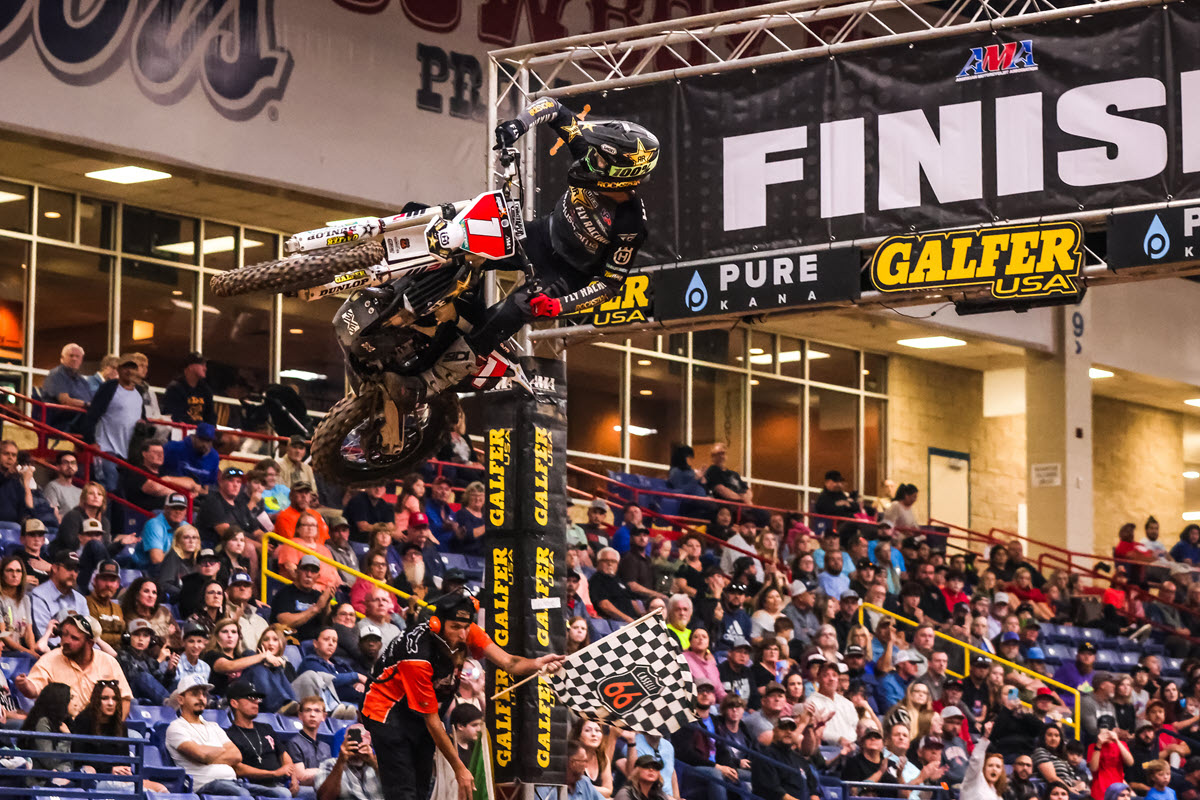 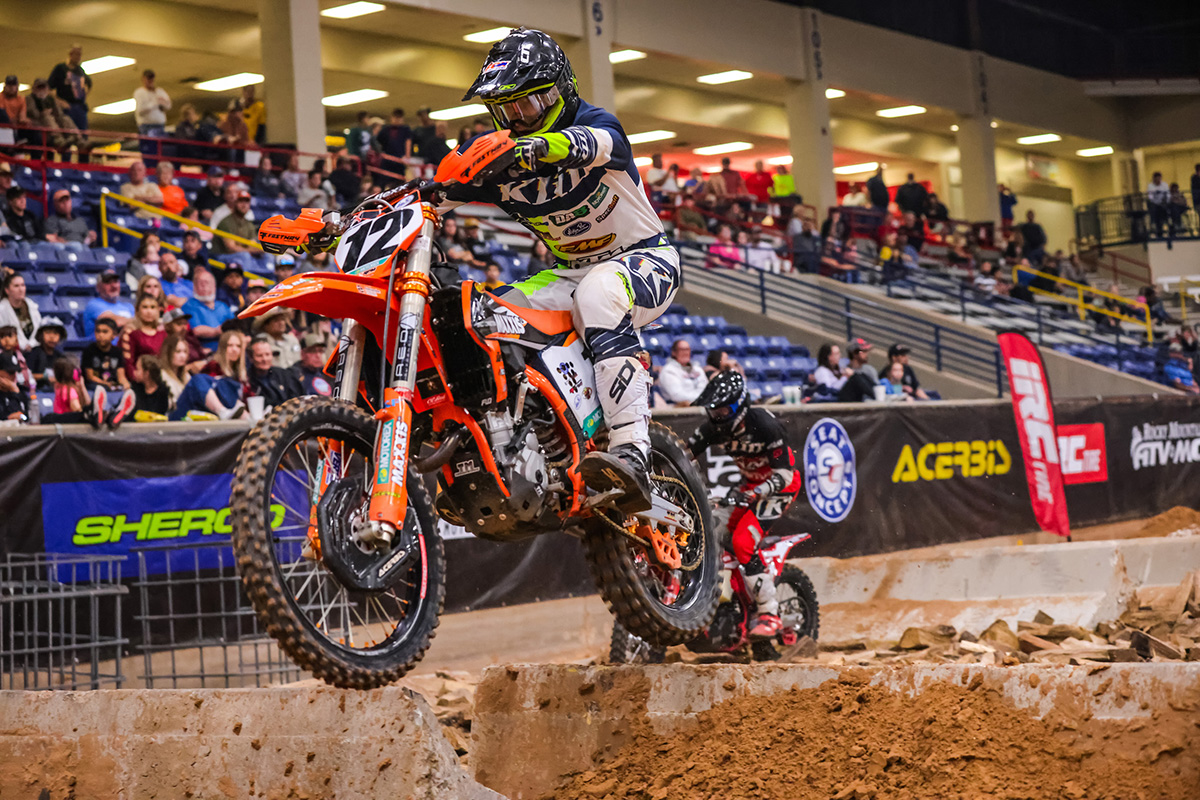 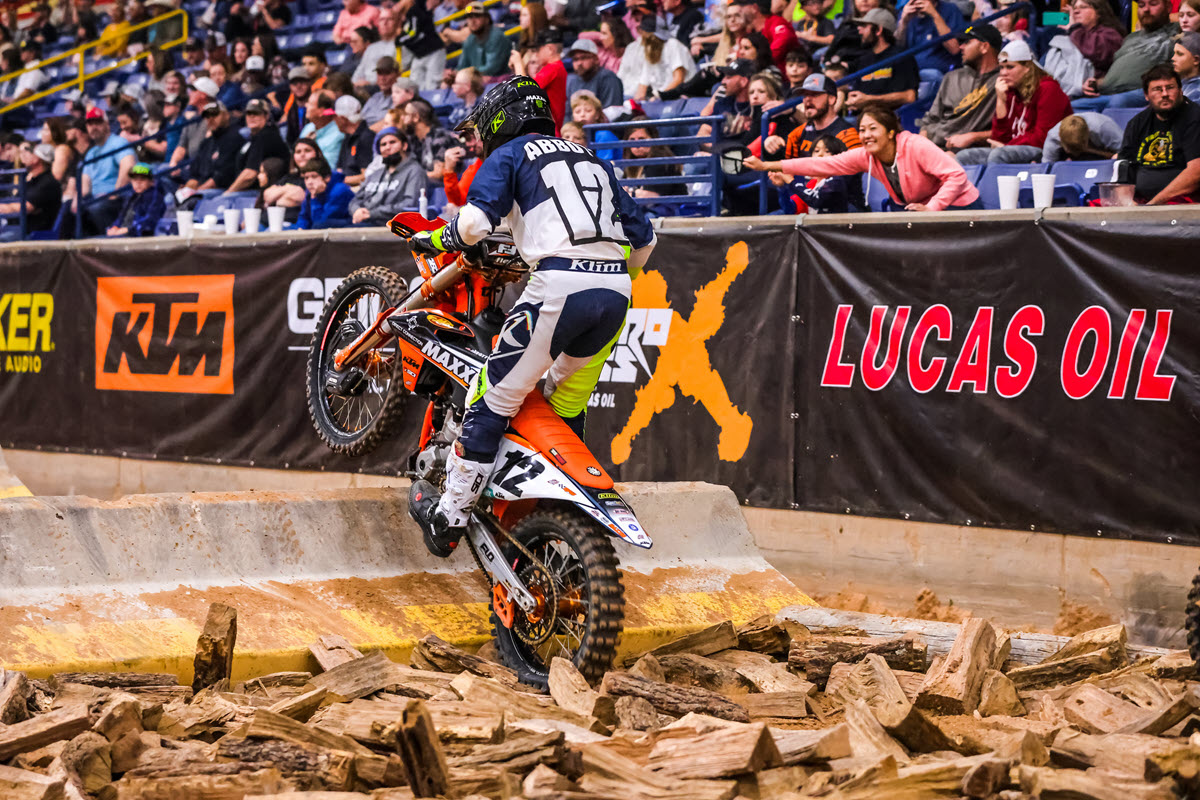 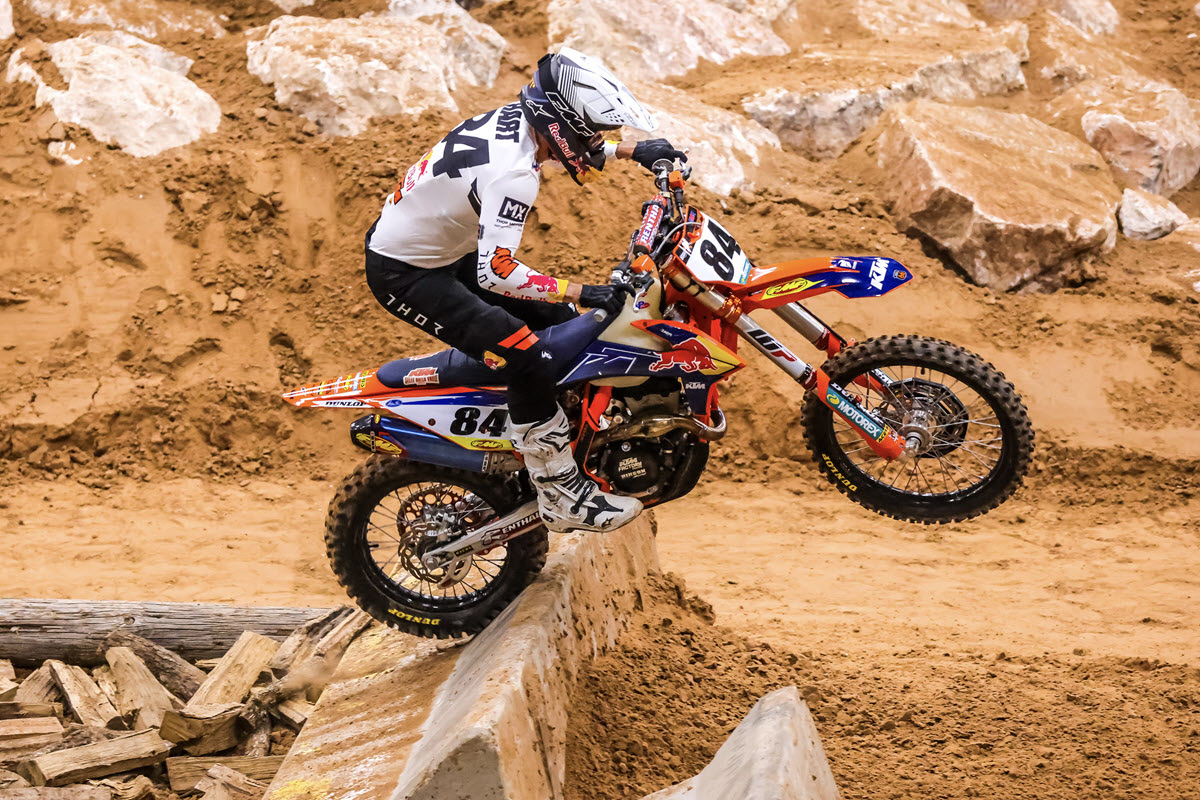 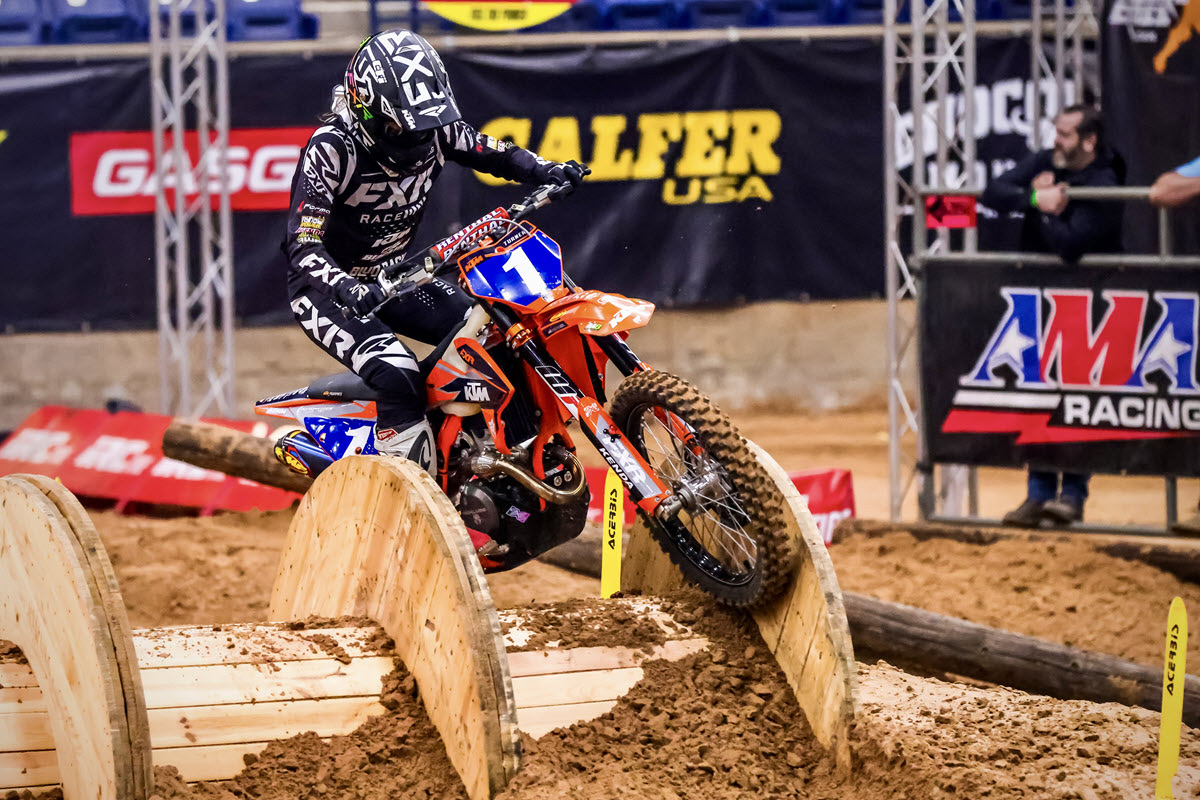 Colton Haaker made it two overall wins from two rounds of the 2021 GEICO AMA EnduroCross series in Amarillo, Texas where Cooper Abbott scored his best ever EX result with second place ahead of Trystan Hart.

The packed programme in the Amarillo National Center in Texas allowed fans the chance to see the top fourteen pro riders run their hot-laps during the evening programme rather than during the afternoon. The hot-lap results set the gate picks for the first of the three motos and it was Rockstar Husqvarna’s Colton Haaker who once again set the fastest time of 46.299.

FMF Red Bull KTM’s Trystan Hart was second with a 47.939 time ahead of SRT Off-road’s Cory Graffunder in third with a 50.168 time to round out the top three. Pennsylvania’s Ryder LeBlond finished fourth with a 50.562 and Max Gerston rounded out the top five on his GASGAS with a 51.192 lap time.

Check the Amarillo track onboard with Spencer Wilton

When the Pro race action kicked off for real it was Noah Kepple who took the first Moose Racing Holeshot of the night in moto one with Hart, Nick Thompson, Gerston and Haaker in tow.

Hart took over the lead and Haaker worked his way into second quickly with Gerston hanging close in third. Haaker managed to pass Hart halfway through the moto and opened gap. Hart hung on for second and Gerston crashed near the end of the race to allow Abbott and TM rider Ty Cullins through for third and fourth. Gerston recovered for fifth in the moto.

The second moto race start inverts the finish positions from race one, so the top eight riders start on row two. LeBlond took advantage of his front-row start to take the holeshot and was followed by Thompson and fellow Utah rider Anthony Johnson.

Abbott was the first of the top riders to work his way through the field and took the lead on the second lap. Hart and Haaker meanwhile were fifth and sixth until a mistake pushed Hart further back.

Haaker kept up relentless pace to move into second but his moto two ride saw a few mistakes which kept Abbott clear out front and able to take the moto win, the second of his career. Haaker was second ahead of Cullins who put in a great ride for third in the moto and Germany’s Tim Apolle finished fifth on a Beta.

In the final moto, Gerston blasted to the front ahead of Hart, Haaker and Abbott but Colton worked his way into the lead before the end of the first lap. Hart and Abbott moved past Gerston for second and third early in the race too and held those positions to the finish. Gerston rounded out a solid evening with fourth in the moto and Apolle had another strong ride for fifth.

Haaker was the clear overall winner with his 1-2-1 moto finishes and his second win of the series. Abbott edged out Hart for second with his 3-1-3 scores to Hart’s 2-5-2 result. Cullins finished fourth overall with 4-3-6 moto finishes ahead of Gerston in fifth with 5-6-4 scores.

Apolle finished sixth ahead of the best Junior rider Will Riordan was seventh overall with 7-7-8 moto finishes.

Haaker was happy to get his second win in a row. “My first time here in Amarillo and the dirt looked amazing but it ended up being unpredictable and I had so many sketchy moments.” Explained the points leader. “I landed on a rider once and almost landed on another rider in the second moto. So it was kind of a sketchy night for me but it was a fun night and I happy to take another win.”

Abbott had a crash during the hot-laps and started two of the three motos on the second row but still finished second overall. “I am pretty pumped on my 3-1-3 moto scores,” says Cooper. “I really earned that second moto win by getting to the front quicker than Colton and Trystan. So that felt great. I am looking forward to doing it again next weekend in Reno.”

Hart had a tough second moto that contributed to a third overall. “The moto two’s will be the death of me.” Said Hart after the races. “I have been struggling to get through the pack and I don’t think I have managed to beat Colton in the second motos since we started that three-moto format. So I will keep working and try to improve on that so I can have a shot at the overall.”

Shelby Turner took her second win in a row in the Women’s class. The KTM rider had to work her way past Morgan Tanke to take the win with Sherco USA’s Louise Forsley rounding out the podium. 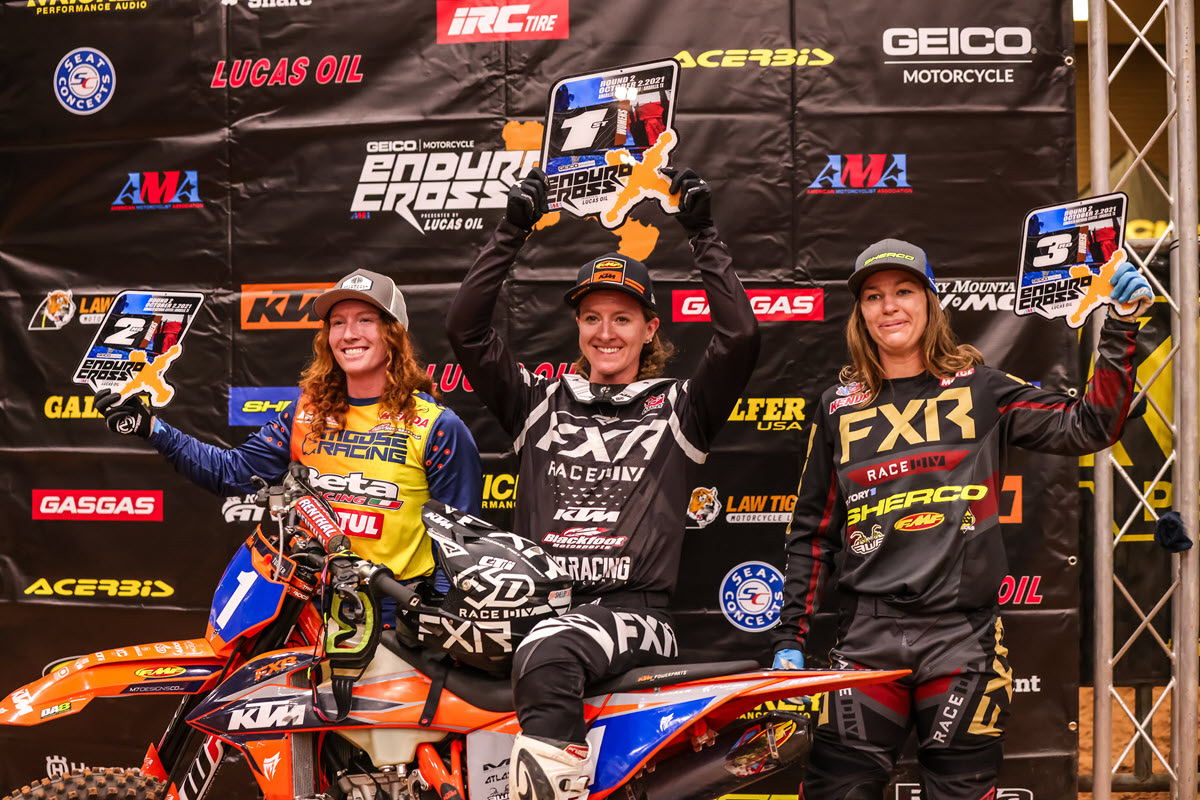 Amateur racers put on a show...

Agustin Pascal took the Intermediate class win riding a TM after a race-long battle with Shelby Turner, who again doubled-up her erace programme and bagged two podium finishes for the evening. Travis Griffiths rounded out the podium on a KTM.

Texas rider Zach Polley won the amateur main event with a last-lap pass to get the local crowd on their feet. Fifteen-year-old Ruffin Dodson finished second and Roggan Frick rounded out the podium.

Craig Thompson, the owner of SRT Offroad dominated the Vet 35+ class on his Husqvarna. David Stirm finished second on his Yamaha and Dan Hayakawa rounded out the podium on his KTM.

Fifteen-year-old Jack Williford took his second Junior Trials class win in a row on his GasGas. Riley Bender finished second on an Electric Motion E Trials bike and Ruffin Dodson rounded out the podium on a Sherco.

Round three of the 2021 EnduroCross series takes place next Saturday, October 9 in Reno, Nevada.