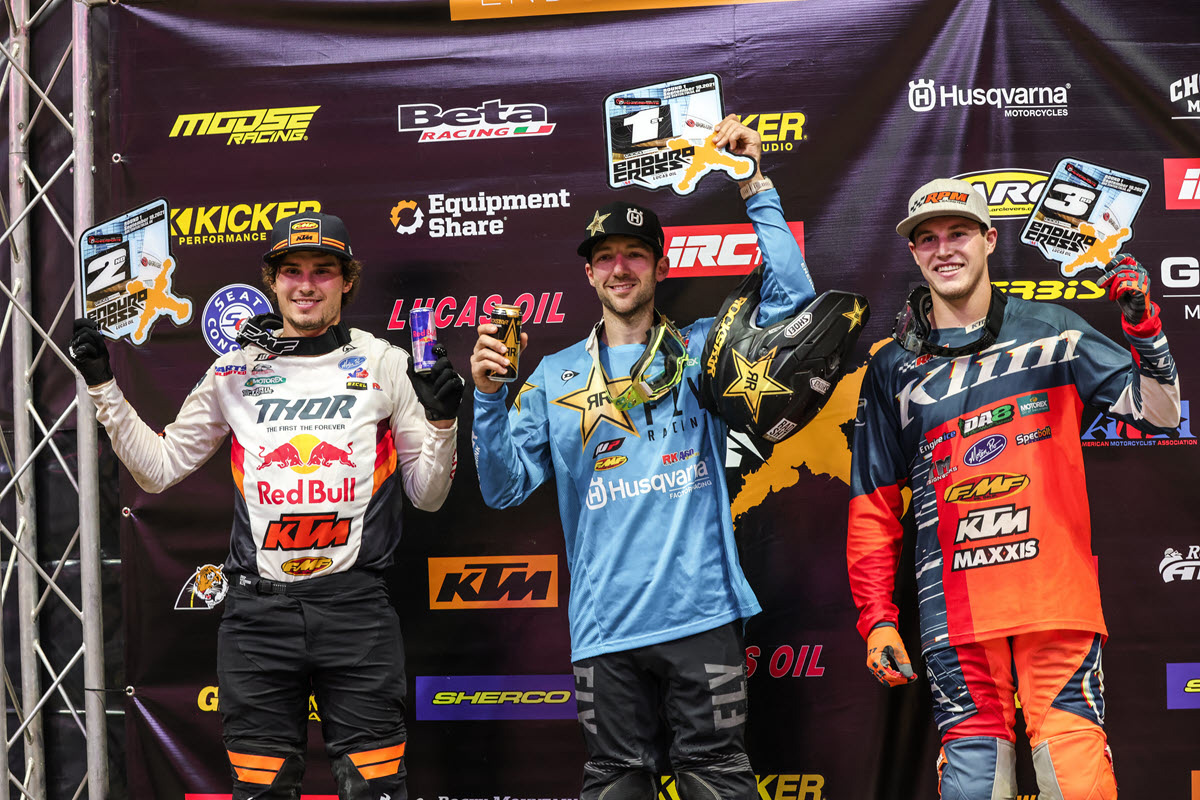 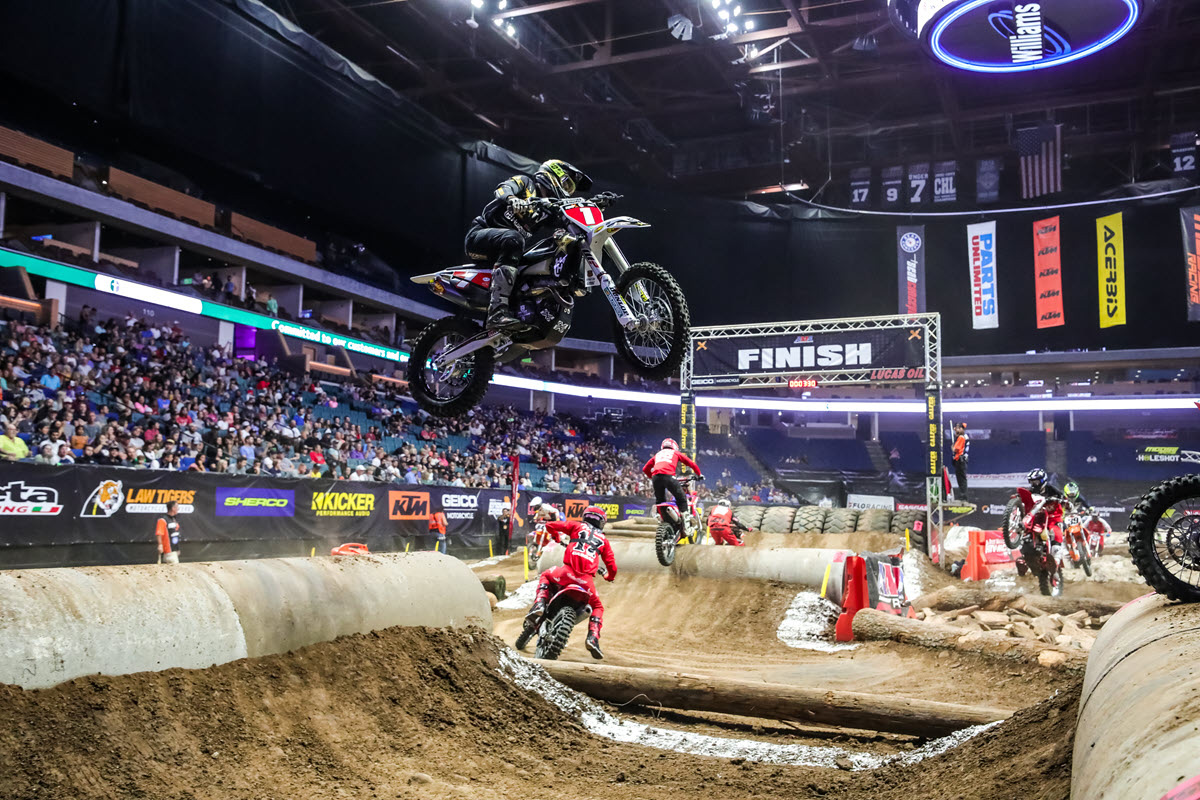 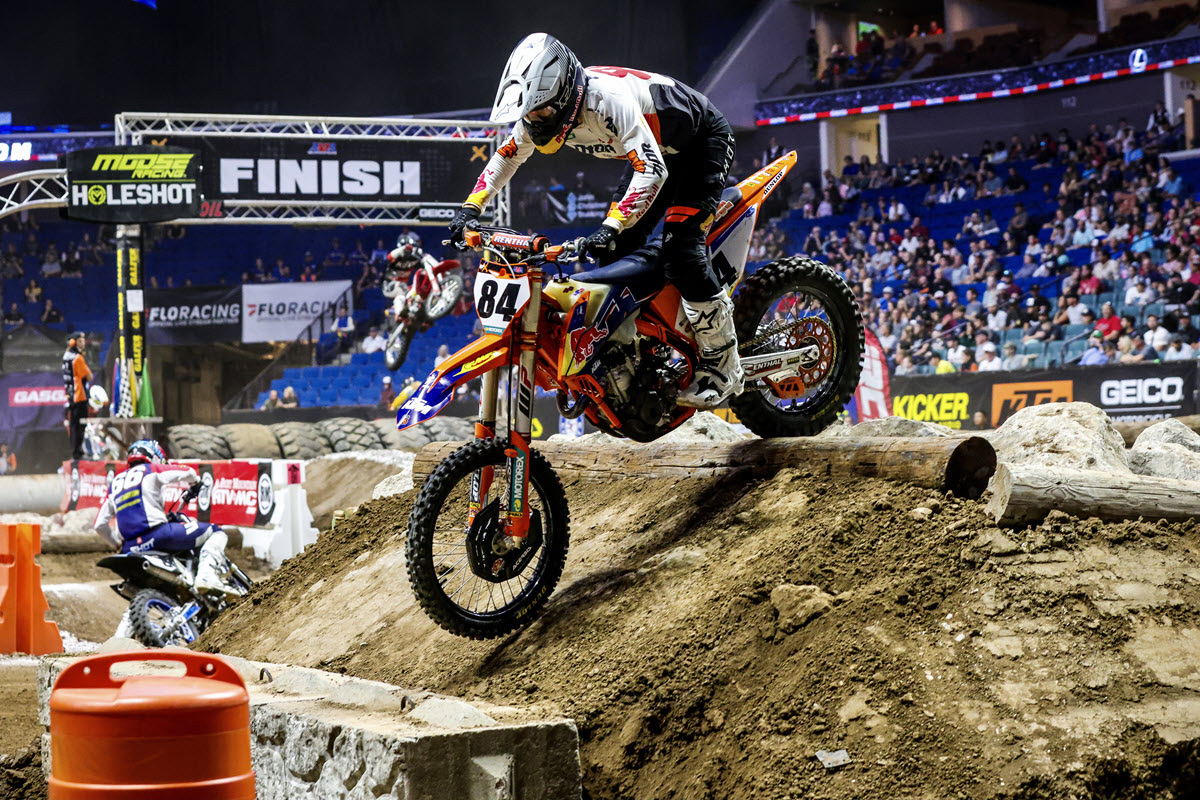 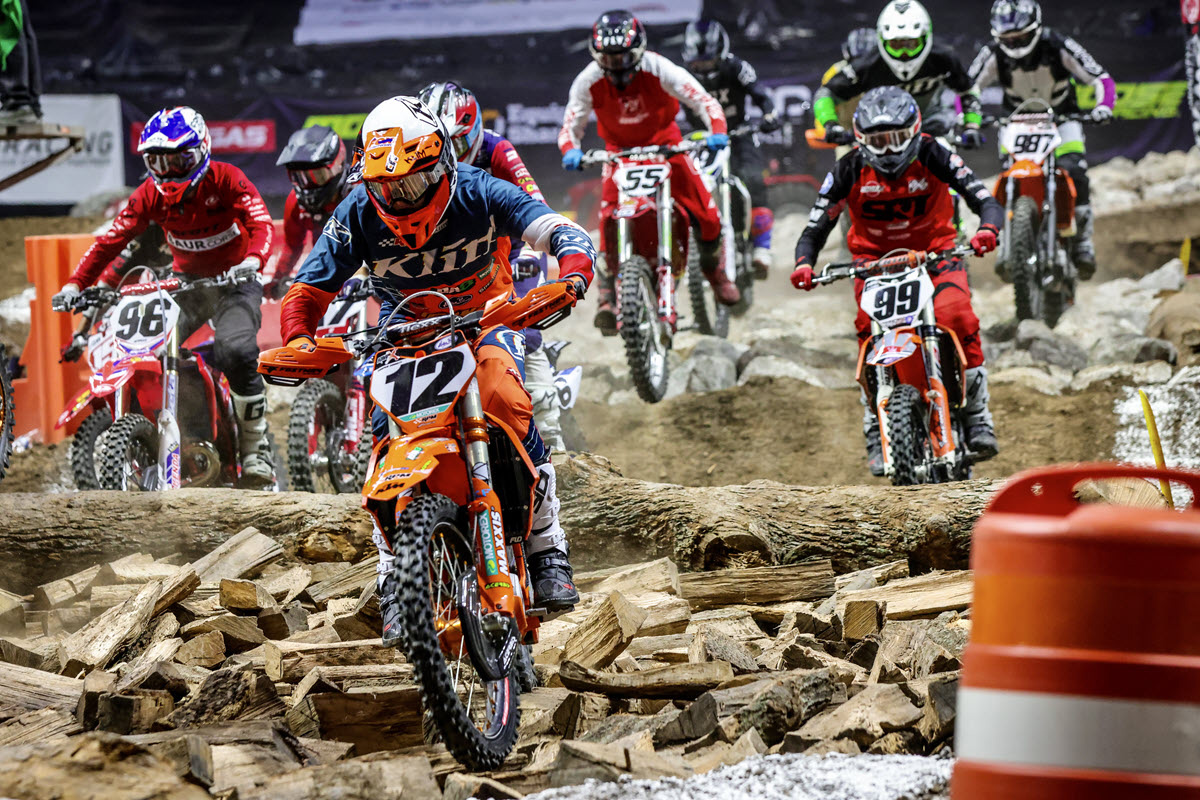 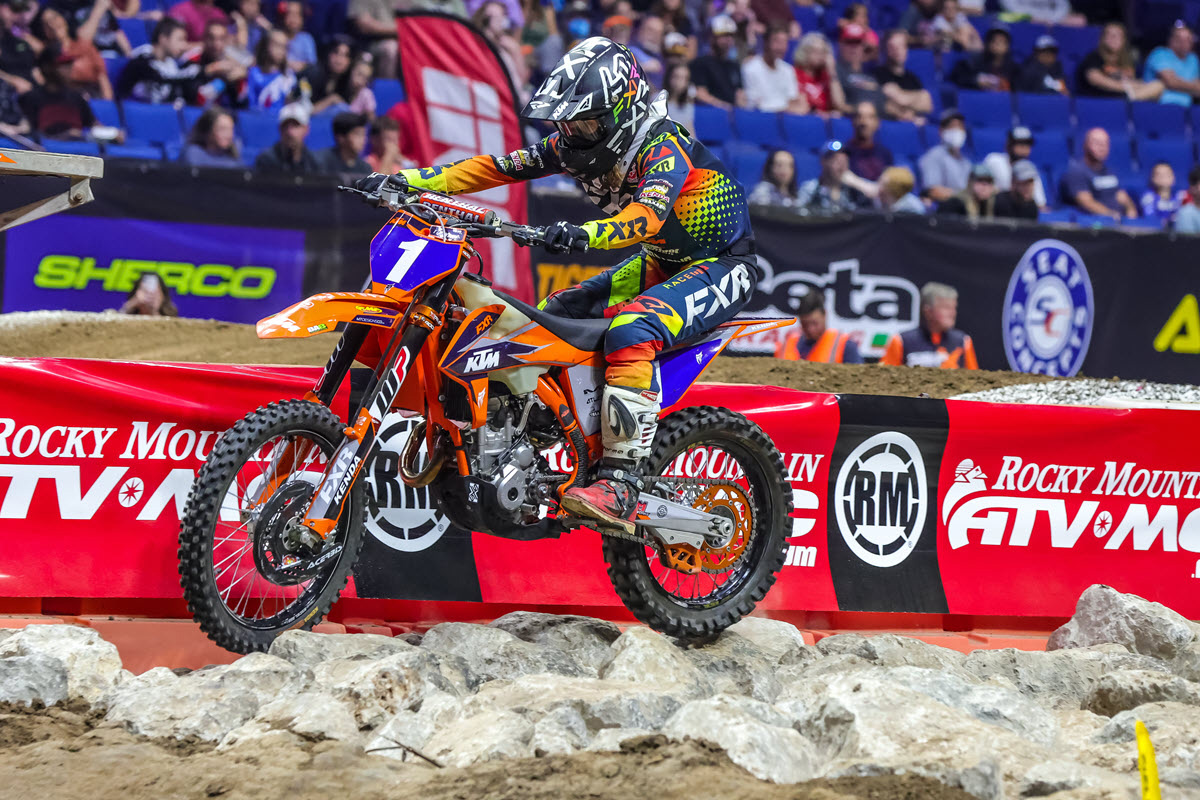 EnduroCross: The fans are back, Colton is back – Rnd1 win for Haaker in Tulsa

Normal service was resumed at the opening round of the 2021 GEICO AMA EnduroCross series in Tulsa, Oklahoma as the fans were back inside the BOK Center Arena and Rockstar Energy Husqvarna’s Colton Haaker made a perfect winning start to the new season.

It’s fair to say the four-times EnduroCross champion Colton Haaker needed this result. Recording a perfect 1-1-1 scorecard in the three opening motos of the 2021 AMA EnduroCros season was a doese of tonic for the Rockstar Husky rider who we haven't seen on a podium since the final of the 2020 EX season.

In front of fans once more and back indoors, Haaker took the win ahead of Red Bull KTM’s Trystan Hart with 2-3-2 moto finishes and RPM KTM’s Cooper Abbott stepping up to the overall podium with 3-2-3 results.

2021 AMA EnduroCross round one in a nutshell:

Say what? The top three riders explain their Tulsa night...

Want to hear more? Listen to the Seat Time podcast interviews from Tulsa:

Shelby Turner once again in the Women’s class

In the Women’s class, four-time Women’s EnduroCross champion Shelby Turner took the win on her KTM ahead of Sherco’s Louise Forsley who had to make a last-lap pass on Beta USA’s Morgan Tanke to take second place. 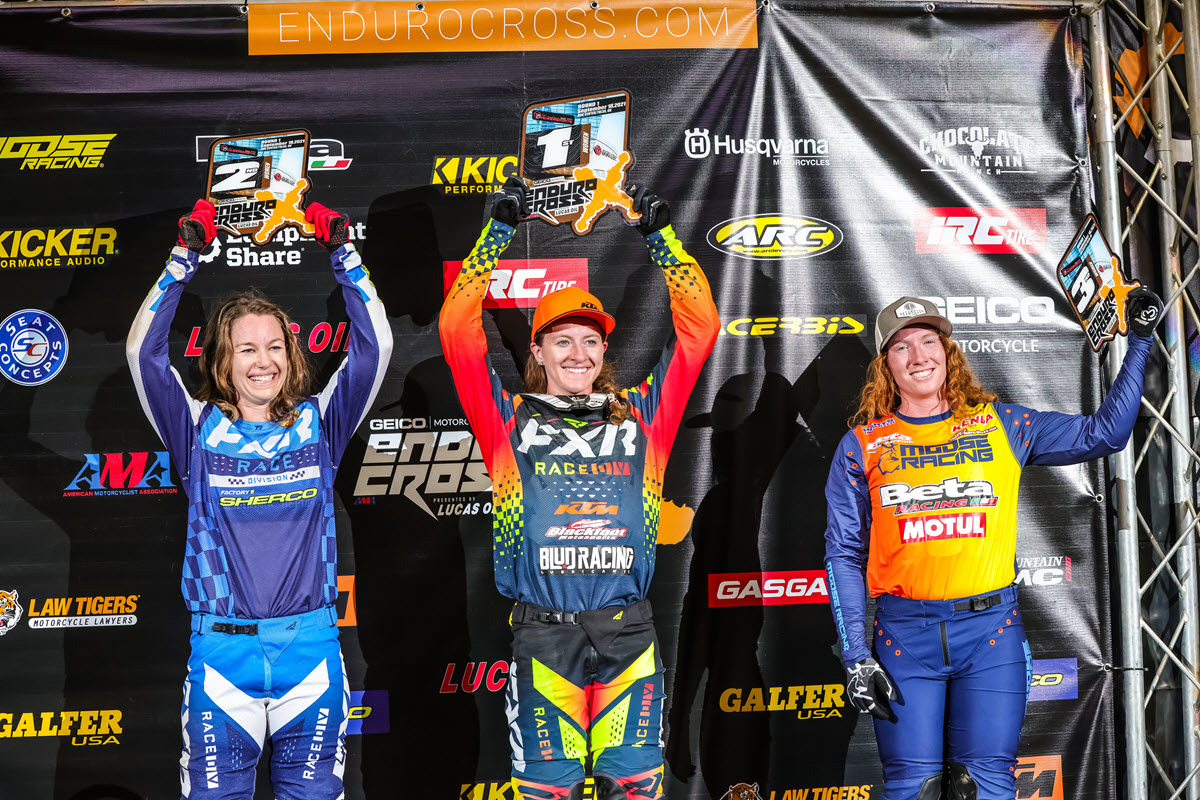 The Intermediate class main event was one of the most exciting races of the night. Coleman Johnson took the win despite Gavin McCarthy leading most of the race. Shelby Turner added another podium to her evening to round out the podium on her KTM.

Sherco mounted Dylan Lozano won the Amateur class main event in his first-ever EnduroCross. Brian Wedlake finished second after being docked a position for missing a section of the Matrix on the last lap. Ruffin Dodson rounded out the podium.

In the Vet class, Yamaha rider David Stirm edged out Craig Thompson (Husqvarna) to take the win with the two riders crossing the finish line with their handlebars locked together. Kyle Strever rounded out the podium on a Yamaha.

Jack Williford raced a GasGas to win the inaugural Junior Trials class, which is limited to riders that are 12 to 17 years of age. Dylan Lozano finished second on a Sherco and Ruffin Dodson rounded out the top three on a Sherco.

Round two of the 2021 GEICO AMA EnduroCross series is on Saturday, October 2 in Amarillo Texas.