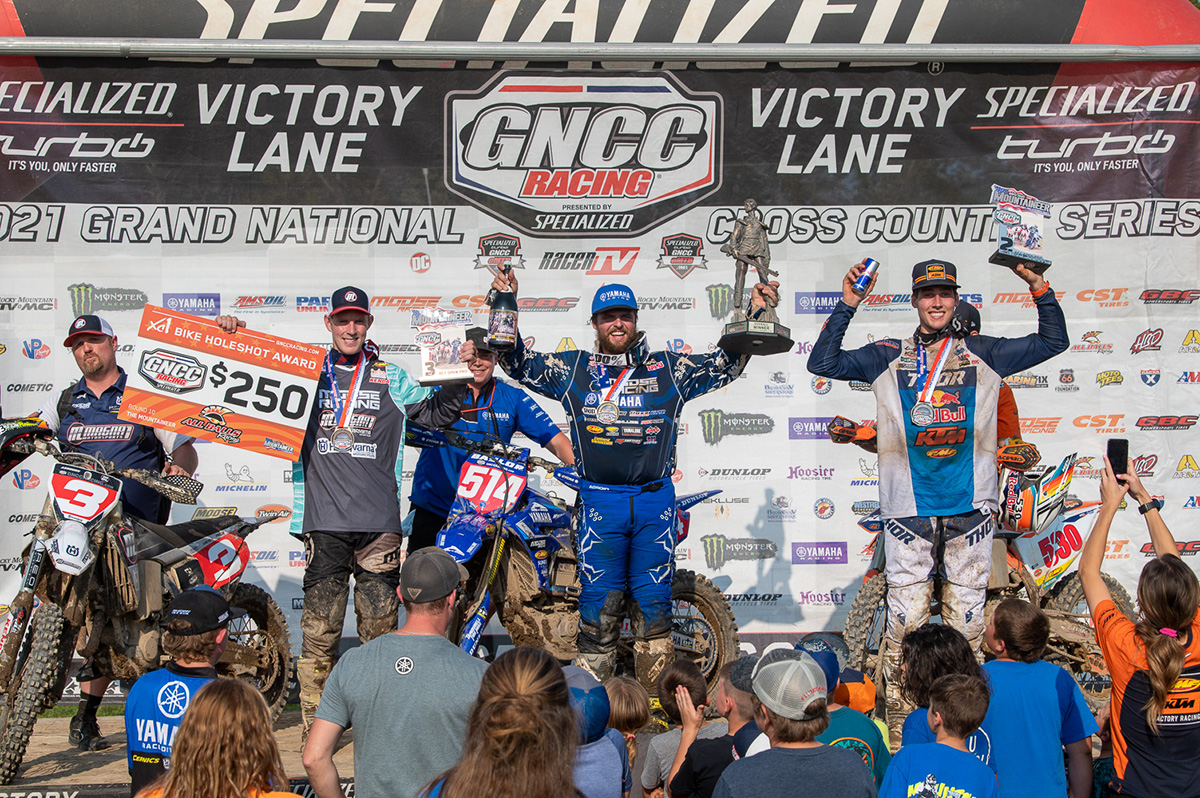 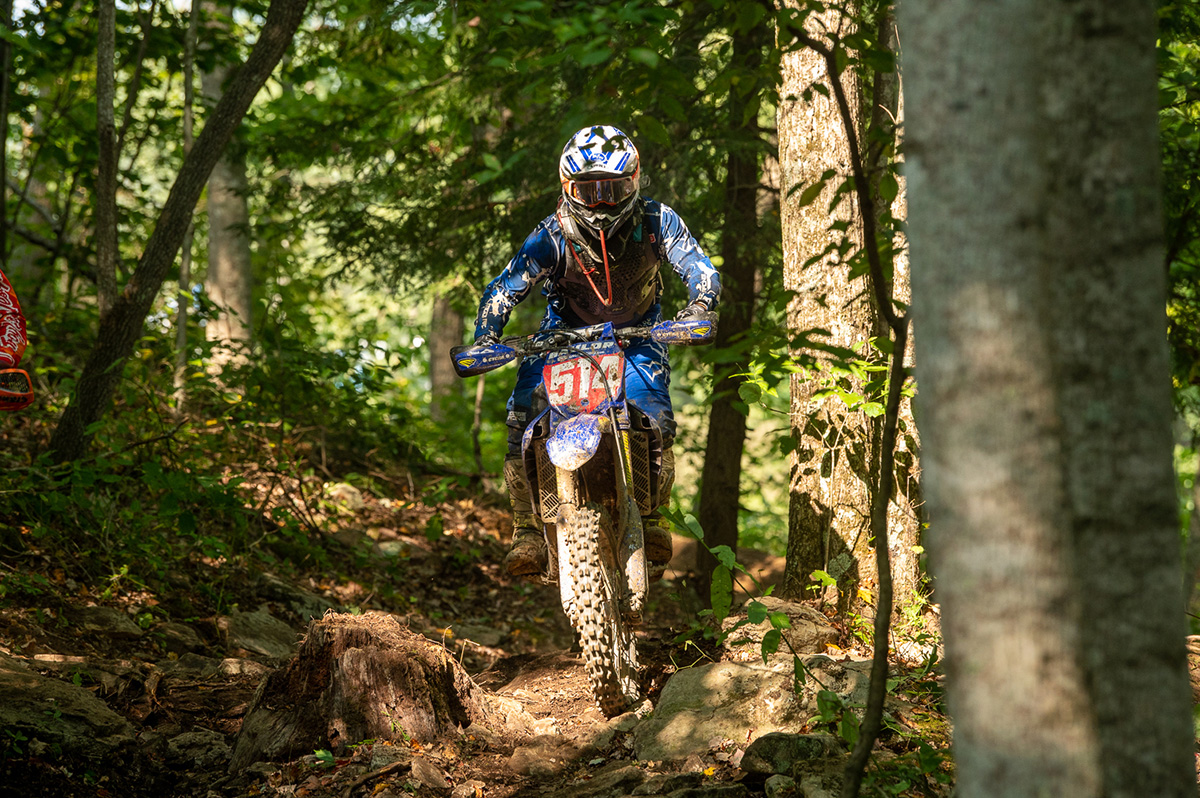 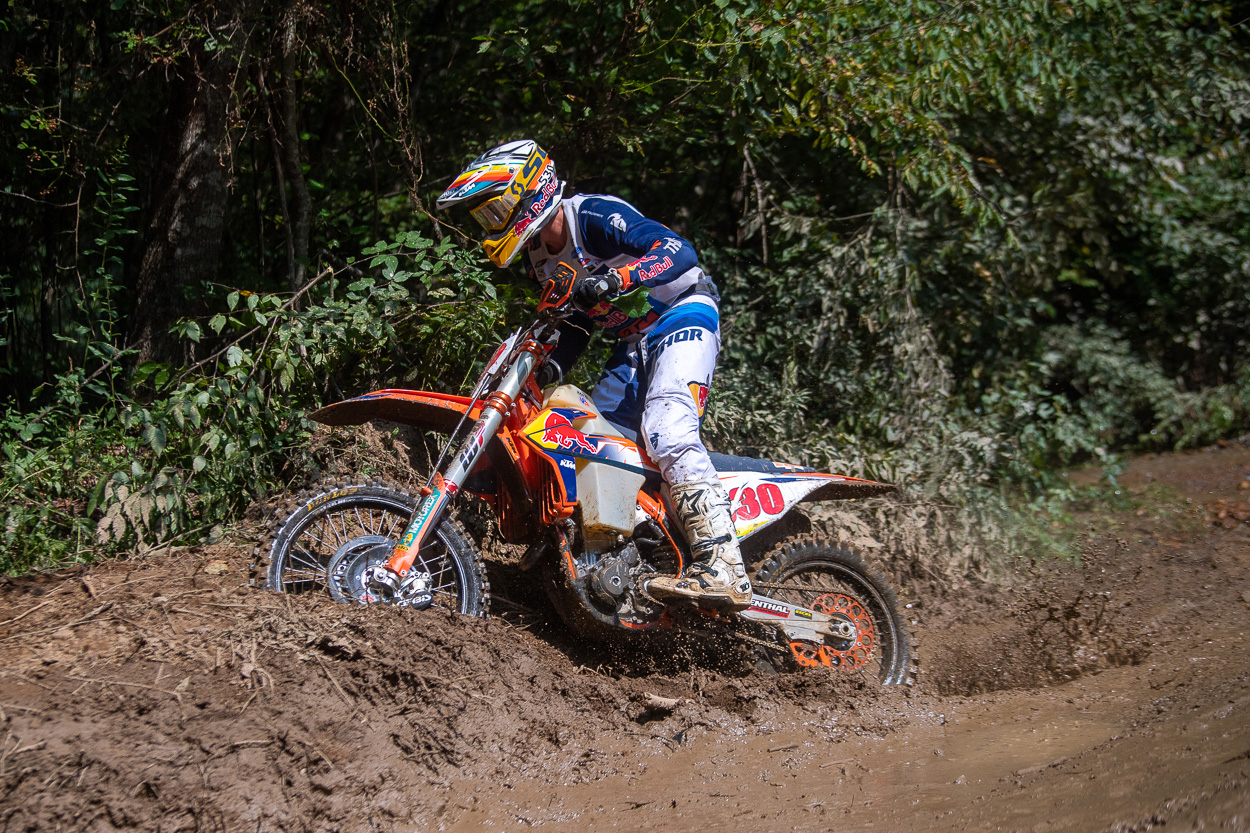 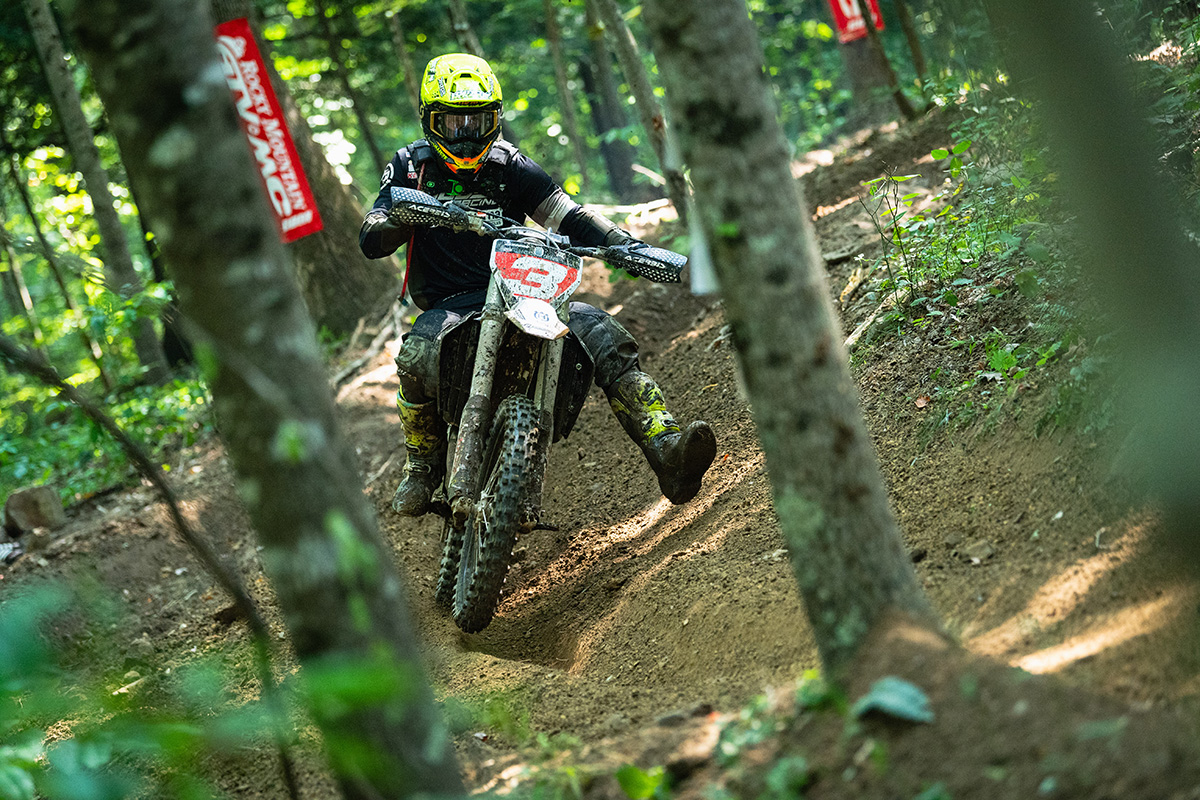 The 2021 Grand National Cross Country Racing season got back into action after the summer break with round 10, The Mountaineer GNCC in Beckley, West Virginia and saw Steward Baylor take his sixth victory of the season to close the points gap on Ben Kelley.

With the leading riders in the 2021 Grand National Cross Country Championship sitting out this year’s ISDE, the first of the final four rounds to close out the season promised no let-up in the title fight.

And so it proved with protagonists FMF KTM’s Ben Kelley leading the points ahead of the AM Pro Yamaha’s Steward Baylor picking up exactly where they left off with a one-two finish.

Taking his sixth win of the season, it was Baylor’s turn to stand on the top step of the podium and it was a masterful performance at the Summit Bechtel Reserve, one of the toughest on the GNCC calendar.

The Mountaineer also marks a year since Steward jumped onto the AM Pro Yamaha 450 for the first time after a trouble 2020 early season. The facts show he hasn’t really looked back since then with a string of wins stretching across the two seasons – 10 wins from 14 race starts legend has it.

If the 2020 Mountaineer win was a mission statement for what could have been last season, this win plants a flag for the final three races of 2021. After taking the flag well-over one minute clear of Kelley, Baylor has closed the points gap to just four and this is going down to the wire.

“I pushed really hard right from the start,” said Steward. “I had a bunch of good lines but the track actually changed a lot during the race but I just tried to do my thing.

“Mid-race I was watching my pit boards and trying to manage it but I had a couple of really rough times through the tough section on the track and threw away like 45 seconds – but that was an amazing section, I love stuff like that. It was old-school GNCC.” 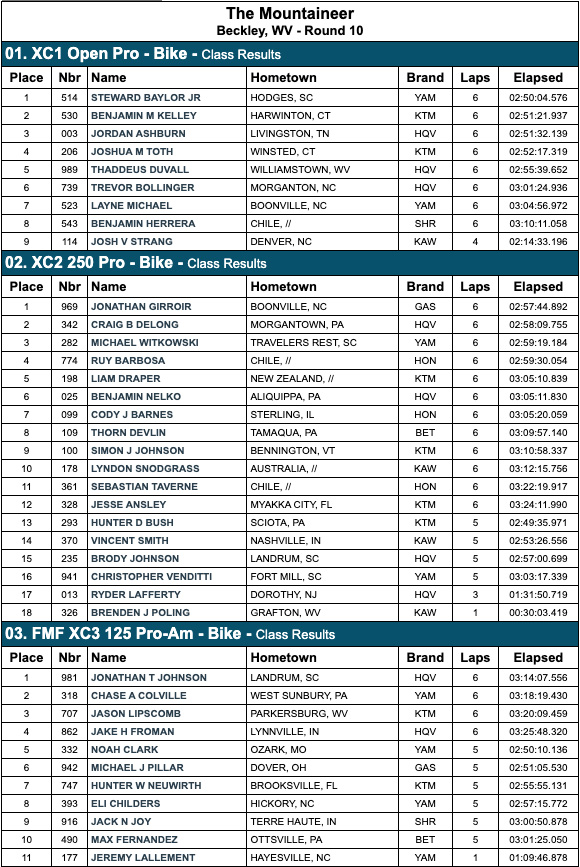 Ben Kelley’s second place wasn’t straightforward and needed hard work after going down early in the race. Jordan Ashburn was again impressive as top Husqvarna rider and ran in P2 for 99% of the race – we’ve said it before but there’s a reason why he has the number three on his bike.

Kelley was slower out the blocks and took a lap or so to get into podium contention. On the last lap Kelley had him in his sights and the pair clashed battling for the same piece of Moutaineer track. In the end it came down to the final turns when Ashburn thought he’d shut the door, Kelley squared off the penultimate corner and snuck through, with Jordan going down in the process.

“It was crazy race.” Explains Ben. “I had a couple scary crashes but other than that, I felt like I was riding good but they kept pulling time on me. I was struggling to keep the momentum going but I just kept charging the whole time and I was able to reel in Jordan somehow on that last lap.

“About a quarter-mile from the finish, I tried to make a pass on the outside but the two lines came together and we bounced off each other and I went flying off the trail and I hit my front brake rotor. I hit the last few corners good, took some different lines and I was able to claim second. So that’s pretty lucky for me on how the day went but a second-place is solid.”

Girroir back with a bang after ISDE duties 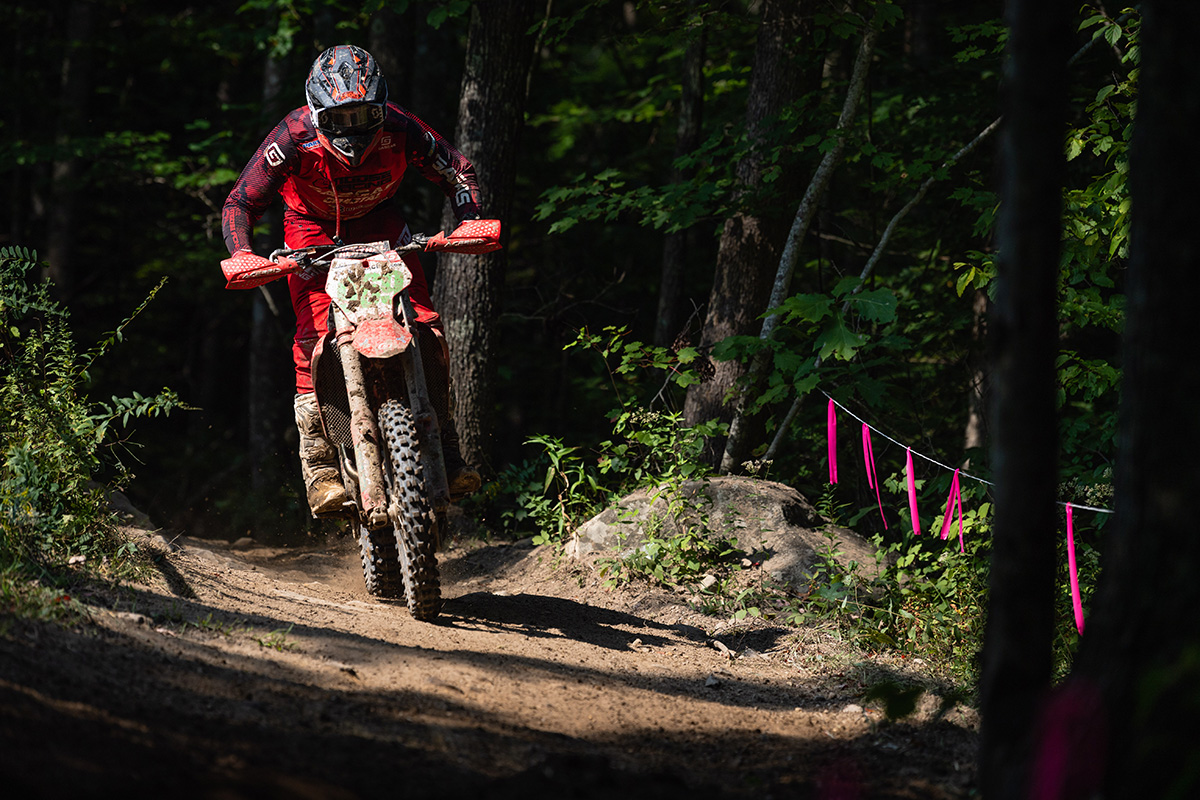 Back from racing the 2021 ISDE in Italy and back at it, Johnny Girroir took the XC2 win ahad of early class leader Craig Delong. XC2 riders occupied overall places sixth to ninth with Mike Witkowski back from injury taking third in class ahead of Ruy Barbosa fourth and inside the top 10 scratch. 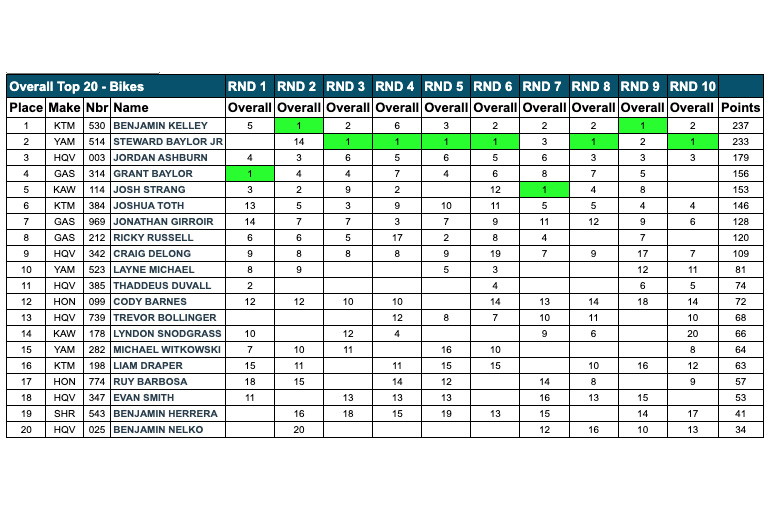 If things are hotting up in the XC1 class then the Women are matching it every step. Rachel Archer took her turn at the top of the class once more with a masterclass in the West Virginia woods.

The tough and technical sections presented little problem for the AM Pro Yamaha rider who stretched over five minutes clear of her closest rival Becca Sheets with Mackenzie Tricker on the third step.

Archer now leads Sheets 264 points to 261 with Tayla Jones (a non-starter due to an elbow injury) a distant third on 175. 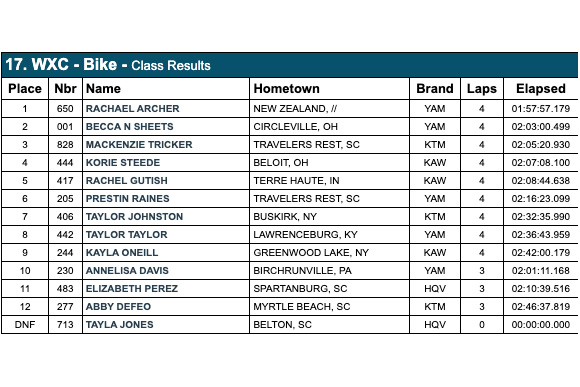